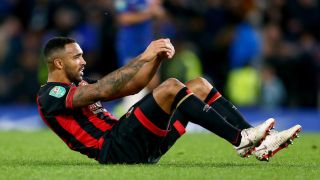 Bournemouth striker Callum Wilson was ruled out of Wednesday's Premier League match against Chelsea after having minor knee surgery.

Cherries boss Eddie Howe confirmed the England international underwent the procedure to "clean it out".

Wilson suffered ruptured anterior cruciate ligaments in each knee within the space of 17 months, with the latter setback coming in February 2017.

But he returned to peak form and has 10 Premier League goals this season – exploits that helped to earn him a maiden England cap in November.

Chelsea were linked with a move for Wilson this month before bringing in Gonzalo Higuain on loan from Juventus – the Argentina striker who made his Premier League debut in the Vitality Stadium contest, where Bournemouth were also without Jefferson Lerma due to an ankle problem.

The boss updates on Wilson and Lerma...

"Losing two players like Callum and Jefferson is a big blow.

"Callum's had a minor knee operation to clean it out and Jeff has an ankle problem, but we are positive going into tonight's game." #BOUCHEpic.twitter.com/QPyJHSvcxm— AFC Bournemouth (@afcbournemouth) January 30, 2019