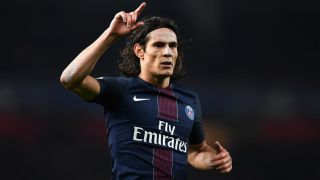 Edinson Cavani, Kylian Mbappe, Antoine Griezmann and N'Golo Kante are among the nominees for the top individual prizes in French football.

Paris Saint-Germain striker Cavani is one of four candidates for the Ligue 1 Player of the Year prize, along with team-mate Marco Verratti, Lyon striker Alexandre Lacazette and Monaco playmaker Bernardo Silva.

The award was won last year by Zlatan Ibrahimovic, who earned the accolade three times in four seasons during his PSG career.

Rising star Mbappe has been nominated for the Young Player of the Year award alongside team-mate Thomas Lemar, PSG's Adrien Rabiot and Nice's Wylan Cyprien.

The men in the running for the Coach of the Year prize in Ligue 1 are PSG's Unai Emery, Lucien Favre of Nice, Jocelyn Gourvennec of Bordeaux and Monaco boss Leonardo Jardim.

PSG's Kevin Trapp, Monaco's Danijel Subasic, Anthony Lopes of Lyon and Baptiste Reynet of Dijon are up for Goalkeeper of the Year.

The awards are given out annually by the National Union of Professional Football Players (UNFP).

The winners will be announced at a ceremony on May 15.