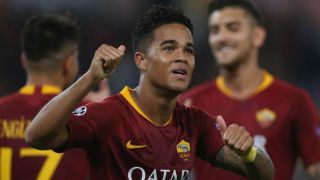 Justin Kluivert, 19, swapped the Eredivisie for Serie A in June after emerging through Ajax's famed academy.

He has started just two competitive matches since arriving in the Italian capital and was overlooked for Ronald Koeman's most recent Netherlands squad.

But the stalled progress has not affected the teenager's lofty targets, according to father Patrick Kluivert, who spent six prolific seasons with the LaLiga giants.

"Of course [Justin] would love to play for Barcelona one day," the 42-year-old Cameroon assistant coach told La Liga Lowdown.

"He expressed in the press his goal is to play for Barcelona.

"He's fitting in quite well at AS Roma. He's in a young team with experienced and non-experienced players.

"I think he needs to begin to play a lot more matches, make a lot of kilometres, and I hope at the end of the day he can sign for Barcelona because that's also my dream, of course.

"If you see your son following in your footsteps, that's a great feeling."