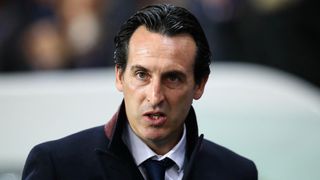 Unai Emery was happy but also disappointed after Paris Saint-Germain qualified for the Champions League last 16 as group winners, despite their loss at Bayern Munich.

PSG's hopes of ending the group stage with a 100 per cent record were dashed by German giants Bayern, who claimed a 3-1 victory at the Allianz Arena on Tuesday.

PSG still progressed to the round of 16 after topping Group B ahead of Bayern and there were mixed feelings for head coach Emery post-match.

"Our first goal was to play well and win the match, our second was to keep the lead," Emery said.

"So I'm 50 per cent happy and 50 per cent disappointed. At 2-1, we were closer to 2-2 than 3-1. If we realise our opportunities, it's another game. We had opportunities to reverse the result, but we did not achieve it.

"At 3-1 for Bayern, when the players saw that they could not change the result, the team then sought to calm the game, to have control, and to keep a solid structure to contain Bayern and ensure the first place of the group."

PSG midfielder Marco Verratti, whose side accounted for Bayern 3-0 in the reverse fixture in Paris, added: "We knew we were playing against a great team like Bayern. They play very well at home.

"Bayern obviously learned from their experience in the reverse fixture in Paris, they didn't leave a lot of room at the back.

"They gave us some trouble in the first half, and scored early. It's hard to come back from that against a big team. Then in the second half we came out of the dressing room with a different mentality, we could have even come back and drawn 2-2.

"It was quite a difficult game but we had chances, I think we had as many as Bayern did, but when you don't score against big teams… they will.

"There are things to improve but I don't think that Bayern dominated We had four-five chances when we were either one-on-one with the keeper or could have scored. We didn't, while Bayern were very efficient.

"They played nice football and have some great players. We need to analyse this game, but it's not a massively disappointing game."