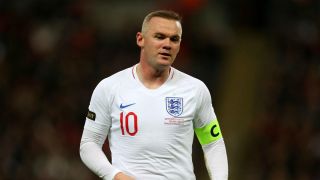 Wayne Rooney was arrested on public intoxication and swearing charges in the United States last month.

The former England and Manchester United captain, who now plays for DC United in Major League Soccer, was arrested by the Metropolitan Washington Airports Authority in Virginia on December 16.

Records from Loudoun General District Court indicated Rooney settled a $25 fine and a further $91 in costs on January 4, with an adjudicatory hearing waived.

A spokesman for Loudoun County Sheriff's Office said: "He was booked into the Loudoun County Adult Detention Center on December 16, 2018, on a charge of public intoxication stemming from an arrest by the Metropolitan Washington Airports Authority Police.

"He was later released on a personal recognizance bond."

Rooney was handed a two-year driving ban in the United Kingdom in September 2017 after admitting a charge of drink-driving.

The 33-year-old joined DC United from Everton in June last year and enjoyed an impressive first season in the US capital, scoring 12 goals in 20 games.

In November, Rooney was granted a farewell international appearance in England's 3-0 friendly win over the USA. He is both the Three Lions and Manchester United's all-time record goalscorer.