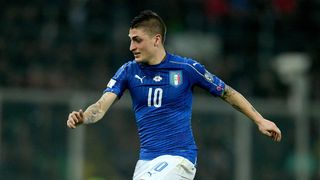 Paris Saint-Germain midfielder Marco Verratti has backed Juventus to succeed where his side failed by beating Barcelona in the Champions League.

The Italian playmaker featured in both legs of PSG's Round of 16 tie with the Spanish champions, which ended 6-5 on aggregate and saw Luis Enrique's men progress after the most dramatic comeback in the competition's history.

Juventus beat Porto 3-0 on aggregate to set up a quarter-final clash with Barca, and Verratti reckons his country's champions, who are unbeaten in their last 14 games in all competitions, can continue their quest for a league, cup and Champions League treble this season.

After playing in Italy's 2-0 win over Albania on Friday, Verratti told TMW Radio: "Juve has a good chance to progress as they have improved a lot this season."

Massimiliano Allegri's side lost 3-1 to Barcelona in the Champions League final in 2015, but the form of players like Paulo Dybala and Juan Cuadrado has put them among the favourites to win the competition this season.