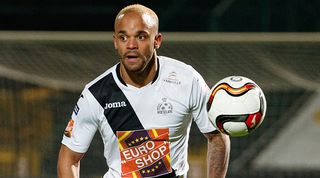 Federico moved to Europe around the same time as younger brother Gonzalo in 2008 but struggled for form in his one and only season in Turkey with Besiktas. After a solid spell back in Argentina, the older brother headed Stateside with Columbus Crew, where the diminutive playmaker has averaged close to a goal every three games and was a runner-up in the 2015 MLS Cup.

A solid career, then, but unlike his superstar sibling at Juventus, Federico is unlikely to attract a bid of £90m for his services. But as he told FIFA.com in 2013: “Honestly, it doesn’t bother me that people want to talk about Gonzalo all the time. I don’t feel any bitterness."

One of two siblings stuck firmly in the shadow of Paul Pogba, Mathias gets the nod ahead of his twin brother Florentin thanks to a largely anonymous career spent in the lower reaches of English football.

While Florentin Pogba has enjoyed spells with Saint-Etienne and Genclerbirligi in Turkey, Mathias counts Wrexham, Crewe, Crawley and Partick Thistle among his former employers. He's currently without a club after being released by Eredivisie strugglers Sparta Rotterdam, which makes Pogba’s occasional benching at the hands of Jose Mourinho at Manchester United feel like a fairly minor problem.

Although the career of Wesley's older brother Jeff was curtailed by injury, it was a different story for younger brother Rodney. He was on the books with Ajax as a youngster and was actually approached by Real Madrid in 2008. Wesley blocked the move, though. “I stopped the discussions,” Wesley said. “I've told him that he first must make a breakthrough at Ajax."

Now 26, Rodney has just signed with DHSC in the sixth tier of Dutch football. Wesley, meanwhile, left Real Madrid in 2009 to sign for Inter where he won the Treble to go alongside his 100+ caps for the Netherlands. If only...

Pierre-Emerick was one of three Aubameyang brothers to try, and ultimately fail, to come through the ranks at Milan. But while eldest brother Catilina at least made a couple of first-team appearances for the Rossoneri and enjoyed a solid enough career in the lower reaches of the Italian and French game, Willy’s career highlight came during a six-game spell with Kilmarnock in 2011.

He now plays for Kray in the German equivalent of League Two, while younger bro Pierre-Emerick was bought by Arsenal for £56m this winter.

Tobias fell in love with football after watching Eric Cantona play for Manchester United. He’s been a Red Devils fan ever since but has never even come close to playing for the club, instead enduring a nomadic career in the Bavarian regional leagues and German second tier.

Though the attacker joined Bayern Munich in 2012, he only ever played for the reserve team and hung up his boots in 2015 at the same time his younger brother Bastian (already a club legend at Bayern) left to join… Manchester United.

Romelu's younger brother was forced to take a step down to go back up after leaving Anderlecht for lowly Oostende in 2013. The left-back’s gamble paid off though when, after three years, 83 appearances and three goals, he landed a move to Lazio.

He's since done well in Rome on the left wing too, having gone to Euro 2016 as part of the Belgium squad but making just one underwhelming appearance (at left-back) in the Red Devils’ shock 3-1 loss to Wales. He'll likely make the 2018 World Cup squad, but have to contend with a place on his bench while his brother leads the line up front.

A Germany youth international, Felix came through the ranks at Hansa Rostock before signing for Werder Bremen in 2010. The midfield battler spent five-and-a-half seasons in the Bundesliga before moving down to second-tier Union Berlin in 2016.

At the same time, however, older brother Toni was busy winning league and Champions League titles with Bayern Munich and Real Madrid. And the World Cup, naturally.

Didier's younger brother was a striker in the mould of the Chelsea legend – just without the goals or talent. Having played for Metz and Le Mans at youth level, Joel landed a string of random trials with St. Pauli, Vietnamese outfit Becamex Binh Duong, NK Zagreb and Leyton Orient.

The lesser Drogba did eventually sign for a club: Metalurh Donetsk in Ukraine in 2007, while Didier was in the middle of his medal-filled stint at Stamford Bridge. It didn’t last for Joel, though, and he left Donetsk after a year without a goal or an appearance to his name.

Sergej Milinkovic-Savic is a name on the lips of football hipsters everywhere right now. Boasting a rare combination of strength and sublime skill, big things are expected of the Lazio’s Serbian midfielder. Which may cause a little envy in his younger brother, Vanja.

Back in 2014, the promising goalkeeper was snapped up by Manchester United – and alas, work permit issues led to the Old Trafford side releasing him just a year later. He can now be found warming the bench for Torino, though did earn a headline earlier this season for one particularly eye-catching free-kick.

Around the time Vincent was establishing himself as the main man in Manchester City’s defence, his younger brother Francois was busy trying to make his mark with his new own club: Macclesfield Town.

It didn’t quite work out. Vincent won his first FA Cup in 2010/11, while Francois was released without having made a first-team appearance for the Silkmen. A career in the lower reaches of the Belgian league followed, although Francois re-signed with second-tier Roeselare in February 2018. Meanwhile, Kompany Snr. is still winning cup finals with City.

Real Mallorca took a punt on a 16-year-old David Eto’o back in 2003, hoping he would prove as successful as older brother Samuel. The budding striker never came close to reaching the same level but did at least carve out a career in the game – which is more than can be said of younger sibling Etienne, who hung up his boots in 2012.

David’s career has included spells in Spain, France, Switzerland, Ukraine, Greece, Slovenia and Cameroon with 16 different clubs. Samuel, meanwhile, has won back-to-back trebles with Barcelona and Inter, as well as 118 caps for Cameroon. It’s been quite a journey for them both.

The less successful older sibling of Barcelona’s serial scorer/biter, Paolo has been knocking around the South American game since 1996. Now 37, the forward remains close to Luis and can be found turning out for Salvadorian top-flight outfit Isidro Metapan in his third separate spell with the club.

Rarely prolific in front of goal, Paolo last hit double figures for goals in the 2011/12 season – though he does have four Liga Nacional Clausura and Apertura titles to his name. So at least there’s that to bring up when Luis gets out his Champions League and Liga medals.