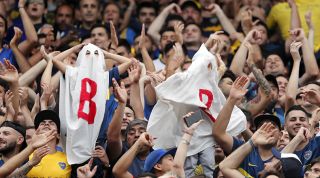 Is this the biggest game in South American club football history? You bet. The great rivals from Buenos Aires provided supreme entertainment in the first leg of the Copa Libertadores final that ended in a 2-2 draw, and now River Plate host Boca Juniors in the crucial second leg.

Starting from next season, the final will be played as a single fixture like in the Champions League – a hugely unpopular decision which makes this gargantuan clash even more special. It’s worth noting that the away goal rule doesn't exist in the competition, and thus any draw would take us into extra-time.

River Plate coach Marcelo Gallardo was a legend at the club as a player and won the Copa Libertadores in 1996. However, his Boca counterpart Guillermo Barros Schelotto is also an iconic figure, having lifted the trophy four times as a player. Now one of them is about to make history on the bench as well.

The only problem with the Copa Libertadores final is that it takes place at the same time as one of the games of the season in Spain - so it might not be the worst thing if the former was postponed due to rain again.

The title race in La Liga is wide open, and Atletico Madrid are only trailing leaders Barcelona by one point ahead of hosting them.

Barça are scoring at will, but their defence is in disarray without the injured Samuel Umtiti, and they’ve failed to keep a clean sheet for 10 league fixtures in a row. The Catalans conceded four goals at the Camp Nou for the first time since 2003 when they were thrashed 4-3 by Betis before the international break.

Meanwhile, Atletico are rightly proud of having the best defensive record in Spain, but Diego Simeone's team are struggling to put the ball in the net. A total of 52 goals have been scored in the last 12 Barcelona games, as opposed to 24 goals in 12 Atletico matches.

An interesting statistic is that Simeone is still searching for his first La Liga win over Barça since taking over at Atletico in 2011. He has prevailed over the Blaugrana twice in the Champions League, in 2014 and 2016, but his domestic record stands at nine defeats and four draws in 13 matches. Is this the best opportunity to change that?

Pellegrini vs Pep and Manchester City

West Ham boss Manuel Pellegrini claims that he has no hard feelings against his former club or their current manager.

"I knew that the moment Pep Guardiola wanted to come to England he would come to Manchester City," the Chilean stated. He was the Citizens' second choice when Pep signed for Bayern Munich in 2013, and is grateful for three seasons which enabled him to win his first trophies in Europe.

Pellegrini’s first game against Pep in the Premier League promises to be very special, and the 65-year-old would be delighted if his Hammers become the first team to beat the champions this term.

The return of Oliver Kahn's heir

Michael Rensing was supposed to be Oliver Kahn's heir. He joined Bayern Munich at the age of 16, excelled at the academy and waited patiently for his big chance. When the legendary goalkeeper hung up his gloves in 2008, the youngster was ready to take over.

However, the timing was disastrous: Bayern suffered a crisis under Jurgen Klinsmann and Rensing was soon labelled as a flop. There was no coming back from that, and he was forced to leave his beloved club in 2010.

His career has never recovered. Having once starred for Germany's under-21s, Rensing never played for the senior side, and after short spells at Cologne and Bayer Leverkusen he decided to take a step back and joined second division Fortuna Dusseldorf five years ago.

Now, at long last, he is back in the Bundesliga and on Saturday the strugglers are visiting the Allianz Arena. It'll be Rensing's first game at Bayern since 2011, but the champions are in a bad way right now – probably even more so than a decade ago. This could be his chance to take sweet revenge.

Davide Nicola's bicycle back in Serie A

In May 2017, everyone in Italy was talking about Davide Nicola, the coach who masterminded Crotone's incredible survival in Serie A against all odds.

He promised to cycle the length of Italy if he was successful in his mission, from the very south to Turin – and was true to his word after taking 20 points from his last nine games. The tragic personal story of losing his 14-year-old son in a traffic accident three years before only made him more popular and likeable.

Nicola resigned from Crotone last December, but now he's back in Serie A as the new Udinese coach, having replaced Julio Velazquez. He makes his debut on Saturday against Roma, and neutral fans are excited to witness his return.

These are eventful days at Spartak Moscow, who have sensationally lost their last four home league games in a row - the first time this has happened in the club’s history.

Three of those fiascos took place under manager Massimo Carrera, who was subsequently fired. However, many fans are still deeply in love with the Italian who led Spartak to an unexpected title in 2017, and they are making themselves heard.

Protests against owner Leonid Fedun are widespread in the stands, and now the new coach Oleg Kononov is making his debut against lowly Samara. Another home loss would make his life extremely difficult from the beginning.

The "next van Basten" faces his parent club

You find surprising statistics in every league, and here’s a weird one from the Netherlands: PSV Eindhoven have failed to keep a clean sheet in their last 19 games against Heerenveen, a run stretching back to 2009.

That could change on Saturday – new PSV coach Mark van Bommel has a perfect record after 12 Eredivisie fixtures, and his side have only conceded once at home, but there's another intriguing sub-plot.

The brightest Heerenveen star this season is 21-year-old striker Sam Lammers, who joined on loan from PSV in the summer and has already scored six goals. Some have even compared him to a young Marco van Basten, and scoring against his parent club would certainly improve his chances of sticking around in Eindhoven next season.

The president of France is a self-confessed life-long Marseille fan, but that's partly because he was born in Amiens, a town that had never had a Ligue 1 team.

That changed when Amiens made history and were promoted in 2017, prompting them to send a special shirt to their famous would-be supporter.

The first two meetings between the "Macron teams" last season resulted in two Marseille wins, but could the story be different this time?