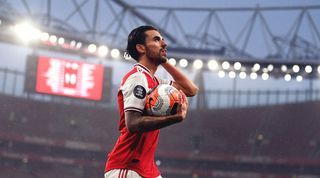 Arsenal have been dealt a blow in the transfer window, as Real Madrid look set to recall on-loan Dani Ceballos to their preseason plans.

Real's defeat against Manchester City in the Champions League last Friday has led to Zinedine Zidane reconsidering his squad, according to reports, with loan stars Ceballos and Martin Odegaard set to return to the Bernabeu to fight for places. Ceballos has starred for Arsenal in Mikel Arteta's midfield, playing a deeper role than perhaps first anticipated, with Zidane said to be impressed.

Arteta was hoping to have the Spaniard around next season, with talks ongoing between Ceballos and his parent club over a loan extension or a £20m signing. It leaves Arsenal a little short in the centre of the pitch, though the club may be looking to offload another player who can fit into a central midfield role, in Ainsley Maitland-Niles.

Maitland-Niles featured heavily at the start of Arteta's tenure but has only been used sparingly since. Rumours of discord between the player and the club have surfaced, with the 22-year-old apparently feeling untrusted by the Arsenal boss.

Now, the Hale End academy graduate is attracting interest from three clubs - two in the Premier League, one in the Bundesliga - with the likes of Brighton & Hove Albion apparently interested in securing his services. Maitland-Niles apparently favours a right-wing role, though has featured at right-back, left-back and central midfield at Arsenal.

Gunners' Head of Football Raul Sanllehi is still looking to shift Matteo Guendouzi, after the youngster fell out with the hierarchy following a spat at Brighton, but it looks like Chelsea winger Willian will be joining imminently, following a public statement about him leaving Stamford Bridge.

Arsenal are still thrashing out a deal for main target Thomas Partey, and remain interested in Lyon's Houssem Aouar - a midfielder who can play centrally and out on the left, and is capable of affecting the first and second phase. The Frenchman could be costly though, with Brentford's Josh Dasilva and and QPR's Eberechi Eze looking like cheaper options. Morgan Sanson from Marseille is another option.

TRANSFERS Kostas Tsimikas: 5 things you need to know about the new Liverpool signing

Elsewhere on the field, Arsenal are said to be looking at Quincy Promes as a replacement for Alexandre Lacazette, who Juventus may swoop for. Lille's Gabriel Magalhaes is still on the radar - but also wanted by Manchester United - while English centre-backs Callum Chambers and Rob Holding are targets for Premier League sides. Reiss Nelson could yet leave on loan, following the signing of Willian.