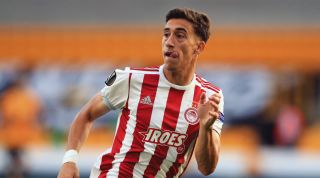 It’s not transfer season without a player you’ve never heard of signing for a club that sounds far too big to even entertain the notion of putting them on the books.

Liverpool have been after a back-up left-back for a while now: Alberto Moreno left the club last year and James Milner is 34. In Kostas Tsimikas, the Reds have paid £11.75m after reports suggested that Norwich City were demanding far too much for Jamal Lewis.

But who is Tsimikas? Well aside from the fact that he has two dogs that he thinks the world of and he signs off his social media posts with “#GodsPlan” - suggesting he may be a Drake fan - all we know is that Jamal Lewis is probably kicking himself at missing out on this transfer.

Konstantinos “Kostas” Tsimikas is one of few Olympiakos stars not to have been born and bred in Athens - instead, from the small Greek village of Lefkonas. This outsider status perhaps translated when he was loaned out first to Danish side Esbjerg and then to Willem II. In both sides, he shone and came back blooded to win a place as Olympiacos’s first-choice left-back.

Now 24, the Greek has been capped three times by his national side and was his club’s an undisputed first pick in defence last season. He will wear No.21 for Liverpool - just as he did in Greece.

While he’s a nifty little player, Tsimikas’s mentality seems to be his defining trait. Klopp described it as excellent and there’s a clear indication from coaches who have worked with him that this lad is particularly determined to reach the top.

How may I assist you?

Tsimikas fits the profile of a typical Liverpool wide-man. He’s devilishly quick, able to take on his man and competent at knowing when to get back into position. His national team coach, John van't Schip, even described him as more advanced than a full-back.

THE BEST RIGHT-BACK IN THE WORLD? How Trent Alexander-Arnold is reinventing the full-back

“He is a good player, a young defensive winger who plays very well,” van’t Schip claimed. “He had a great season always starting as a starter.”

Tsimikas’s advanced role this season has resulted in five assists in 20 games. He could well improve on that figure under Klopp’s tutelage, in a possession-heavy, pressing side that relies on whipped balls from the full-backs.

He’s not all defending and whipping in crosses: check out this wonder goal that Liverpool’s new name scored during his loan spell at Willem II.

It’s not often that a defender skins an opponent receives a one-two and arrows a bicycle kick into the net. Given that Mohamed Salah was nominated for the Puskas Award for what was a routine finish by his standards, perhaps Reds fans will be voting for Tsimikas in the ballot, should he ever repeat the feat in England.

Signing for Liverpool does seem a little out of the blue, but Jurgen Klopp has claimed that Tsimikas was tracked for months before the new Champions plucked up a bid to bring him to Anfield. They weren’t alone in watching him either.

Napoli have been strongest linked with the defender, where he would have linked up nicely with countryman Kostas Manolas in the back four. There was also talk of Leicester City potentially being interested in his services, should Ben Chilwell have departed in this transfer window to Chelsea.

One nice bonus of Tsimikas at Liverpool is that he’s a Nike athlete. If he muscles his way into the first team, expect to see him on new kit posters this time next year.

OK, so the Greek league isn’t exactly a hotbed for footballing gems, ready for the fire of the fastest, hardest, best quality division on the face of the Earth (though Daniel Podence signing for Wolverhampton Wanderers certainly suggests there is talent there).

Should Liverpool fans give Tsimikas a lot of time to adjust? Well, probably. But it helps that he’s played a fair few Premier League sides this season - and he hasn’t disgraced himself.

First came two Champions League games against Tottenham Hotspur where Olympiacos drew 2-2 at home before a pummelling in North London; on both occasions, Tsimikas was a threat going forward. Then came games against Spurs’ rivals Arsenal in the Europa League, where the 24-year-old was superb at keeping Nicolas Pepe quiet. Most recently he faced Wolves. Six decent displays in as many games certainly isn’t bad going.