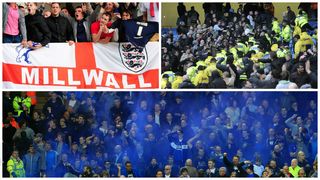 For Sir Alex Ferguson it was all about Liverpool and politely removing them from their perch, but toward the end of his 26-year tenure, he started to twitch his curtains as the noisy neighbours began to throw one too many late-night parties, winning too many trophies and ensuring that today’s game is for more than mere pride.

The first ever game - played between the early incarnates West Gorton (Manchester City) and Newton Heath (Manchester United) in 1894 was described by the local press as “a pleasant game”. Pleasant. Doubt that was the word United fans were uttering when, in 1974 Denis Law backheeled them out of the old First Division – or at least thought he had, anyway. Turns out United were going down anyway.

Someone in Liverpool once said, “All you need is love”. Well, if it’s a football rivalry you’re after, then sometimes all you need is a good old row. In 1892, perturbed by their Anfield landlord’s rent demands – not to mention his fondness for selling beer – the religiously minded Everton said their piece, packed their bags and moved across the park. John Houlding – said landlord – created Liverpool.

The halcyon 1980s saw both teams dominate the English game, sharing trophies and even terraces in what was called the Friendly Derby. But today the club’s bickering forefathers will be pleased to note tenser times.

Such is the plethora of football institutions in this part of the world, there seems to be more disputes than a Jeremy Kyle Christmas special – but this one is all about the second city bragging rights and so often it spills into more than mere bragging.

“We’re gonna s**t on the Villa,” is perhaps the most commonly sung song at St Andrews, while Villa fans will often be found, “Walking along, singing a song, s**ing on the City as we go”.  One local councillor recently noted that Aston Villa – as the “bigger” club, should in fact be called Birmingham – but that was before Villa’s recent demise. Next season should be interesting.

To their Glaswegian cousins, this capital city derby may seem like The Krankies having a marital spat, but that snobbery aside, there is no doubting that this rivalry, dating back to 1875, is deep rooted and fierce.

While nothing like the Old Firm, sectarian tendencies can rear their head at Easter Road or Tyncastle when the neighbours come to play, but on the whole local bragging rights are the only thing up for grabs. Having said that, when asked about the recent showdown, Hearts’ Abiola Duada seemed underwhelmed. He had, after all, recently played in the Belgrade derby. “Fans destroy seats there,” he remarked. “Last time they started a fire and we had to stop the game.”

For the 1927 FA Cup Final – in a great show of Welsh unity – Swansea fans traveled to Wembley to help cheer Cardiff’s famous victory over Arsenal. That was then. The 1980s and the miners strike is seen as a watershed in increased hostilities between the two, so much so that in 1991 and for four seasons, away fans were banned from the fixture.

One of the most lauded outbreaks of South Wellian agro was in 1987 when trouble spilled onto a Swansea beach, seeing scores of Cardiff fans retreat into the sea. As recently as 2011, Swansea fans could be seen wearing snorkels to the fixture.

Nothing like a national border to fuel the flames of ire. Chester; middle-class, Roman, home to Holyoaks. Wrexham; none of those things. And so, fuelled by such differences (this is often labelled a matter of rich vs poor) and extreme proximity, this is a fixture that continues to generate more than neighbourly banter.

READ MORE: More Than A Game: Chester vs Wrexham

Take the Chester fan website that declares, “In a perfectly ordered society, streets would be named after [players who have scored against Wrexham]. When it comes down to heroes they’re right up there with Spartacus, Hercules, Theseus and, yes, even Biggles. By scoring for Chester against our arch-rivals, they have genius shining from every orifice.”

City fans like to sing about a red, red Robin that goes bob-bob-bob-bobbing along. Rovers fans like to suggest shooting the b***tard. It’s that simple really. This being the West, let us indulge in some western rhetoric and suggest that Bristol isn’t big enough for the both of them.

Dating back to 1894, clashes between the two are always heated. Just three years ago, 50 fans were arrested after a pitch invasion at City’s Ashton Gate. Little surprise when you learn that during the first ever clash between the sides, the referee had to remind the two teams that “this isn’t a boxing contest”.

The thing about “The Old Farm” (surely the best-named rivalry in the whole world) is that it isn’t about local hatred or banter. Most rivals – however fierce – have to work with each other or in some cases sleep with each other. Not here.

Separated by 50 miles and located in two different counties, these two genuinely despise the soil upon which the other walks. Throw in recent shoulder barges for a place at English football’s top table and you have perhaps one of the most underrated derbies around. Ooh-Arghh and all that.

Stanley Matthews and Tom Finney. Two knights of the English game. All long shorts, brylcreemed hair and corinthian spirit, right? Wrong. These two troublemakers were in fact the catalyst for what today is a nasty affair. Back in the 1940s and '50s, these two sets of fans would bicker over who was the better player.

Since those innocent days, the ‘Donkey Lashers” (Blackpool has donkeys) and the Nobbers (Preston Knob End – see what they’ve done there?) fight over more than mere wingers, so much so that in 1978, at a Vibrators gig in Preston, a local man was stabbed to death when fighting broke out between to the two sets of supporters.

Why derbies really matter to us - and always will

No local rivalry has one man at its centre more than this one. Brian Clough managed both teams to unprecedented success and today the 14-mile journey between the two camps is separated by Brian Clough Way. The road itself may have recently been named the worst in England but there is no doubting the passion felt at each end.

Today league championships and European Cups are mere reminiscences, but be it Robbie Savage waving a scarf or Nathan Tyson waving a corner flag, hatred is never far away.

This game between two clubs whose origins lie in east London’s docklands was once labelled the Docker’s Derby but – sounding like a night in a San Francisco nightclub – that tag never caught on. Testosterone, though, has never been far from the fixture, especially in those early days as rival fans were also working at competing docks.

That football violence bard Cass Pennant once wrote of the initial rivalry: “They are two like-for-like cultures and people, and all that separates them is the Thames, but they would kill each other to take the throne.” Grrr. In 1910, Millwall moved south but no matter, the fixture remains fierce. Or should that be (in fluent Danny Dyer) PRWOPER NORTY?

Weird one, this. They say there’s no point in crying over spilt milk but try telling that to Palace and Brighton folk. In 1976, an irate Eagles fan threw his coffee from its polystyrene home all over the then-Brighton boss Alan Mullery, who proceeded to show them all what he thought using clear hand gestures. Thus creating the mother of all caffeine hits. Kind of.

Maybe the fans are simply disputing car-parking paces at the equidistant Gatwick airport. Maybe it's all an estate agents' ruse; what with new high-speed train links, they do say Brighton is now south London-by-sea.