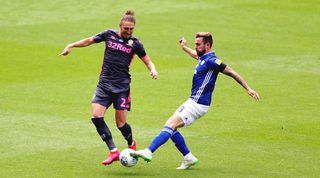 The Championship table can be hard to decipher at the best of times. Luckily our Long Table - or Cann table as it's officially called - can help put that Leeds United lead into perspective.

From looking below, Leeds and West Bromwich Albion can breathe a sigh of relief. The season's not quite over, but that's a healthy cushion that they have over Brentford. Fulham fans, however, will be less than happy after slipping down to fifth recently.

While Nottingham Forest and Cardiff City make up the other two sides in the play-offs at the moment though, the chasing pack below are all separated by two points. The actual table puts Preston North End and Bristol City miles apart: in reality, it's closer than it looks.

At the bottom of the Championship, Luton Town and Barnsley are still somewhat adrift in the battle to remain in the league. Hull City and Huddersfield Town will be looking over their shoulders nervously, but there's a cluster of clubs just above who won't want to be sucked into the mix.

As ever, the Championship is proving itself to be the most unpredictable, unrelating and downright stressful league on Earth for everyone involved, right?