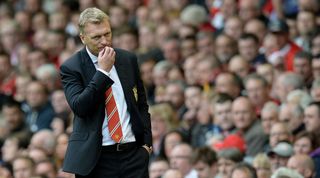 1) United have issues in attack

"If you're a manager and you're not buying in this window while everyone else is, you're standing still," grumbled Graeme Souness on Sky. Coming after Manchester United's 1-0 defeat at Liverpool, the comments should resonate at Old Trafford.

The Red Devils may have won the title at a canter last season, but since then their greatest-ever manager has retired and their direct competitors have spent freely; United's championship charge is already in danger of getting stuck in the mud.

Of particular concern for United after 4 points from 9 - their lowest total at this stage for five years - will be the lack of decisiveness shown in midfield and wide areas.

David Moyes' team managed only one shot on target in the box in three hours against Chelsea and Liverpool (with a further 6 off target) and, oddly enough, creativity has predominantly been the domain of their defenders. Nemanja Vidic and Patrice Evra created the most chances of any United player in each of these two heavyweight clashes with 2 apiece.

United dominated possession in both games - but final-third creativity has been lacking. They managed just 10 successful crosses from 57 attempts against Chelsea and Liverpool: a painfully weak completion percentage of just 17.5%.

Meanwhile, United also completed only 2 of 14 take-ons in the final third at Anfield, while their attacking-third passing in central areas was also feeble.

Moyes can take some crumbs of comfort after dominating possession at Anfield. But with Wayne Rooney (injured) and Shinji Kagawa (err, anyone?) absent, his first defeat as United boss raises questions about his team's ability to effectively and consistently conjure chances. (JF)

2) Some nils are bigger than others

It wasn't exactly a goal-plated Premier League weekend - Swindon bagged as many as 14 combined top-flight teams could muster - but some sides' bluntness looks more problematic than others.

Everton have started in typical Roberto Martinez style, for better or worse – averaging 500 passes and 1 point per game – but they can count themselves unlucky to have only scored twice from their 55 shots, of which 18 have been on target. Newcastle left it late against Fulham but got 9 of their 25 (!) shots on target, as opposed to none of their 16 in last week's home 0-0 with West Ham.

The Hammers may be more worried by their own diminishing returns. Since easing past Cardiff on the opening day by scoring with 2 of their 4 shots on target, they've troubled the goalkeeper just once in three hours. Sam Allardyce won't mind the odd dour 0-0 on the road, but at Upton Park this weekend Asmir Begovic didn't have a shot to stop – and Stoke deserved their 1-0 win.

Sam's West Ham may be unwittingly waiting for Andy Carroll, but West Brom have no such luxury. Nicolas Anelka returned against Swansea but his sole effort was off target. That sums up their season: three games, no goals, no wins and only 4 shots on target, from an opening trio of opponents - Southampton, Everton and Swansea - whom the Baggies beat last season. Steve Clarke is one manager who won't bemoan the transfer window still being open… (GP)

3) ... so Everton need substance with their style

His sides usually win acclaim for pretty play and an attack-happy mentality – but are Roberto Martinez-led units all style and no substance?

Nobody said following David Moyes was ever going to be easy. Indeed, few were expecting instant success from their new man with an admired ideology that was bound to demand patience. But three dominant games have yielded as many points, and already there are discontented murmurs in the blue half of Merseyside.

While Everton fans are notoriously loyal and vociferously supportive of their managers, even the most patient of Toffee-nuts might be feeling a little flat after their side’s disappointing goalless draw at Cardiff on Saturday.

It’s not like Martinez’s men are playing badly – far from it, in fact – but their profligacy in front of goal is already bordering on the ridiculous. Thirteen efforts on goal in south Wales followed an eye-watering 22 against West Brom, after another 20 against Norwich on the opening day. Shots on target, as previously mentioned, amount to just 18 – and, more importantly, only two goals, scored within five minutes back on the opening day.

It seems only a matter of time before the floodgates open but the Toffees have already lost valuable points in matches they were expected to win. With the small matter of a deadline-day battle to keep hold of Leighton Baines and Marouane Fellaini too, it may get worse before it improves. (JB)

Southampton were many pundits' tips to be this season's Premier League 'dark horses'.

One of the key aspects of their relative success last term was their energetic pressing in the middle of the park - with French midfielder Morgan Schneiderlin leading the charge, often with the almost equally impressive Jack Cork alongside him.

Yet despite seeing his central midfield perform so well last year, Mauricio Pochettino sought to strengthen, with Victor Wanyama arriving from Celtic for what was, briefly, a club-record fee. But it already appears to have affected Schneiderlin's game somewhat.

Perhaps most tellingly, having only been subbed off once in the Premier League just last season, Schneiderlin has already been withdrawn twice this term - at half time during last week's home draw with Sunderland, and after 71 minutes of Saturday's defeat at Norwich.

It is, of course, early days - any partnership takes time to develop and, as they say, form is temporary, but a fully functioning Schneiderlin will be key to any hopes Southampton have of upsetting the established order over the coming nine months. Ensuring he's back doing what he does best is essential. (JM)

5) N’Zonzi stands out for Stoke

Though the game was billed as a battle of the giants, Mark Hughes's men attempted fewer long passes and completed 91 more short efforts than when Tony Pulis brought them to town last November. In the end they outgunned the Hammers with 15 attempts at Jussi Jaaskelainen’s goal.

Helping to pull the strings for the Potters was Sam Allardyce’s former Blackburn charge Steven N’Zonzi, linked with a move to West Ham before Stoke swooped for his services in 2012. He was courted by Big Sam again in May.

The 24-year-old was far and away the most efficient passer of the game, completing 61 of his 67 passes, while he also led the way for his team defensively with 12 ball recoveries.

It's form that has even surprised his manager, with Hughes admitting: "Until you work with players on a daily basis you can underestimate their talent. I was one who maybe didn't put Steven into the bracket of a top Premier League player.

"He still has faults that he has to work on, he understands that, but the way we play will bring the best out of him." (GD)

6) 'Twas a good day for Gabbidon

Danny Gabbidon may not have known much about the contact he made to hand Crystal Palace an early lead over Sunderland on Saturday evening. Nevertheless, the Welshman can still celebrate scoring his first Premier League goal in 116 top-flight outings.

It proved to be just the start of a very good day for the 34-year-old, who was an indomitable force at the back for Ian Holloway’s side. Work ethic and determination were vital ingredients, and will continue to be so if Palace are to survive, and Gabbidon was one of many who left every ounce of energy on the pitch.

The Eagles were spurred on by their battling midfield duo Mile Jedinak and Kagisho Dikgacoi, the two star performers in the passing charts.

Yet Sunderland’s poor first period, in which they failed to test goalkeeper Julian Speroni, was in part thanks to Gabbidon, who blocked three of the Black Cats’ goal-bound efforts.

Gabbidon finished the day with 19 successful clearances inside his own half, and won all 7 of his aerial duels to leave the visitors frustrated and Paolo Di Canio to muse: “It was difficult to be angry. Normally I can tell you I'm very angry, but it was difficult - it was too poor that it was really difficult to say something. I don't think that even the most arrogant player in the world could argue if you said the first two goals were absolute rubbish.” (GD)