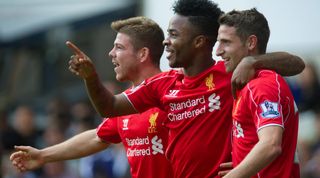 The Liverpool of last season live on

Another game against Tottenham; another three goals to add to the nine plundered over both matches last season. Liverpool might have been without Luis Suarez this time out, but they were still incredibly effective at White Hart Lane against a Spurs side who topped the table going into this weekend.

Mario Balotelli was handy on his debut, and should have headed home after two minutes, while Daniel Sturridge linked up with his new strike partner well in the first half. Raheem Sterling, though, proved again why he's a player Liverpool can depend on at just 19 years old, with another superb big-game display. We all sniggered when Brendan Rodgers labelled him the best young player in Europe last season, but Sterling's consistency since has been exceptional. At one point during the second half his quick-step trickery beat three Tottenham defenders, only for the youngster's weak finish to deny him another memorable top-flight strike ("He was in the box like Ricky Villa and finished like Ricky Gervais," quipped his manager).

He's good enough to win games for Liverpool every week, and good enough to get them in the top four; looking forward, it's going to be fascinating watching him try to do it in the Champions League.

Now, to the bad bits. For all of Liverpool's attacking verve, the Reds are still incredibly suspect at the back and should have been punished here. At 1-0, Mamadou Sakho and Dejan Lovren both went for the same ball (not their first mistakes of the game), allowing Nacer Chadli a glorious opportunity that the Belgian spurned. It proved to be Spurs' only shot on target of the game. Rodgers may have improved in the full-back slots – time will tell on that front – but big problems still exist in key areas.

Wenger's stubbornness may concede the title

...if he refuses to sign a quality striker before tomorrow's 11pm deadline. When quizzed (again) on the subject before Sunday's abject display at Leicester, the Arsenal boss again reiterated his stance that Yaya Sanogo and Alexis Sanchez are both adequate replacements for Olivier Giroud. The fact is, though, they're just not.

Sanchez bagged his first Premier League goal of the season against the Foxes, but did so playing from the left in a position he is clearly better suited to than as the Gunners' lone frontman. That he was dragged off at half-time against Everton and replaced by Giroud was surely telling – if Arsenal are to have a chance of winning the title, they need a goalscorer. It's not buying for the sake of it, but simply out of necessity.

The 21-year-old Sanogo can't be expected to lead the line when he isn't ready, which has long been proven by now. At Leicester he played his part in Sanchez's goal (if inadvertently), but was otherwise poor with both his finishing and link-up play as the Foxes' backline got the better of him. Wenger has already demonstrated his unwillingness to play Lukas Podolski, while Joel Campbell has spent the last three seasons on loan in Europe with varying degrees of success.

Every rival club (even Manchester United) has at least one proven goal-getter in their ranks. It's now a matter of hours before Arsenal effectively concede they're to be left behind again. Unless Wenger's magic sleeve has a surprise in store...

Leicester have hit the ground running

Nigel Pearson's men may be yet to pick up their first win of the season, but their negotiation of the first three matches has been mightily impressive. The Foxes' two points from difficult fixtures against Everton, Chelsea and Arsenal have all been thoroughly deserved, while they may well have picked up all three against the Gunners on Sunday had record signing Leo Ulloa not squandered a glorious second-half opportunity.

Pearson has put together a proper team during his successful tenure at the King Power Stadium, and, despite a raft of key early-season injuries, managed to successfully deploy gameplans that have unsettled the top flight's big boys. Against Arsenal the Foxes looked dangerous on the counter after again battling back from behind, and frustrated the north Londoners with their resolute defending to claim a share of the spoils.

The fixtures don't get a great deal easier just yet, with a trip to Stoke followed by a visit of Manchester United, but there's hope for both games if performances so far are anything to go by. Then there's a certain Argentine who's yet to pull on the shirt...

Villa's fine start is about to get tested

WDW reads the form sheet for Paul Lambert's men after three games of the new campaign, after Sunday's 2-1 victory over Hull at Villa Park. It's been an excellent start for the Midlanders, who many tipped to struggle at the start of the campaign with Christian Benteke's long-term injury in mind.

There's nothing quite like a middle finger to the critics, though. "I thought in the first half we were outstanding; the game plan and the tactical aspect of the game against a good side - the three at the back system is a hard one to play against," wailed Lambert, presumably having forgotten Manchester United's opening games of the season. "It's been a terrific start for us and hopefully we can keep it going."

Fair comments, for the most part – Villa have been very good. They dominated for large periods against European-worn Hull, and took a two-goal advantage into the break thanks to strikes from Gabby Agbonlahor ("unplayable," said his boss) and Andreas Weimann. Not even Nikica Jelavic's Aly Cissokho-aided effort after the break was enough to knock them off their perch.

That, however, is where the next four matches come in: Liverpool (a), Arsenal (h), Chelsea (a) and Manchester City (h). Good luck, lads.

It's hard to argue that £32 million isn't an extortionate amount of money for a man who kicks a ball about, but, relatively speaking, Diego Costa is already proving one of this season's bargains. In the current market, where Angel di Maria has joined Manchester United for £59.7m, and James Rodriguez went to Real Madrid for a similarly eye-popping sum, JoMo & Co. should take great pride in snapping up their proven net-rippler for half of that amount.

The Brazil-born hitman has already notched four Premier League goals in only three games, a feat which took soggy Spaniard Fernando Torres 39 matches to achieve. It's clear that there's no further comparisons needed between the two, though; Torres' Stamford Bridge spell was disastrous. Chelsea have moved on, and so has the player.

It's how they've done so that's most impressive. Costa is the missing piece up front, and quite simply the man to win them the title this season. His two goals against Everton on Saturday epitomised everything the Blues lacked last season – both were impeccably well-taken efforts to add to his poacher's strikes against Burnley and Leicester. "When you see him every day you realise he's literally got everything," beamed skipper John Terry post-match. "He's got off to a flying start and long may it continue, because that was the difference today."

At this rate, Chelsea fans may well be saying that come May.

...but all hail Chelsea's secret weapon

In a team whose superstars are well-known and seemingly obvious, it's right-back Branislav Ivanovic who is one of the top flight's most underrated performers. The Serb has been a mainstay of the Blues' backline for the last four seasons, but only really been used as a permanent right-back from last season. Now it's difficult to see how he could play anywhere else.

In this position he's even more of a goal threat than before, and proved it by netting twice already this season. His maurauding runs down the flanks have borne fruit this season; against Burnley his deflected cross was crucial for Costa's equaliser, he set up the striker again after beating two men against Leicester, and ghosted in behind Everton's defence to score at Goodison Park.

Defensively, meanwhile, he remains an absolute rock and also allows Mourinho to switch to a 3-5-2 seamlessly should he wish, which he did on occasions last season. Simply, he's an immovable object right now.