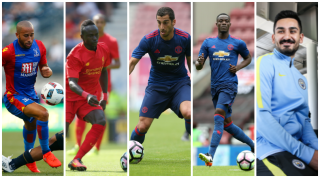 The Euros are barely over, but several Premier League clubs have already been busy in the transfer market this summer – with some players involved in France signing for new clubs before they’d had chance to take a summer holiday.

Here, then, Ben Wilson uses FIFA 16 to look at how six of the most active English sides – Arsenal, Manchester United, Manchester City, Liverpool, Palace, and champions Leicester – might line up next season with the likes of Granit Xhaka, Zlatan Ibrahimovic and Nolito taking their Premier League bows.

There are some familiar faces who’ve moved between domestic squads, too, such as Liverpool’s Sadio Mane, a £36 million capture from Southampton, and Andros Townsend, after completing a switch to South London from relegated Newcastle.

Only the one (big) move for Arsene Wenger so far, with Swiss midfielder Granit Xhaka arriving from Monchengladbach. He looks a natural fit in a side which smartly blends the experience of Olivier Giroud and Alexis Sanchez with young legs belonging to Hector Bellerin and Alex Iwobi.

The Eagles have already dropped well into eight figures on Newcastle winger Andros Townsend, West Ham defender James Tomkins, and Marseille custodian Steve Mandanda. And there are rumours that the spending won’t end there, with Liverpool’s Christian Benteke apparently on the way.

Last year’s champions were fortunate on the injury front, so here’s how they’d look should anything happen to Kasper Schmeichel, Robert Huth, or Shinji Okazaki. Ron-Robert Zieler, Luis Hernandez, Nampalys Mendy and Ahmed Musa are the signings on show.

Is this the end for Simon Mignolet? Here’s how the Reds may line up this campaign in front of new keeper Loris Karius, a £4.7m buy from German side Mainz. Joel Matip (in defence) and Sadio Mane (rampaging down the right wing, but Jurgen Klopp may deploy him up front) are the other additions of note.

Zlatan Ibrahimovic and Henrikh Mkhitaryan scarcely need any introduction, and unsurprisingly bring immediate assists and goals on the virtual turf. It’s clear £30m defender Eric Bailly can hold his own at the back, too – meaning Daley Blind may have to settle for a bench role under Jose Mourinho.