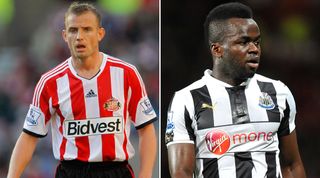 Poyet’s chance to knee-slide his way into the Black Cats' good books.

Sunderland’s new manager would probably not have picked the Tyne-Wear derby for his home debut at the Stadium of Light, but it could prove to be the perfect tonic to last weekend’s second half horror show at Swansea.

The Uruguayan will be wary of recording a victory over the Mackems’ arch rivals in his second game at the helm, however. Predecessor Paolo Di Canio did just that in April – the 3-0 win at St James’ Park was Sunderland’s first there in 13 years – but the Italian went on to win just two more matches during his tumultuous 13-game reign on Wearside.

Nevertheless, the rock-bottom Black Cats need a win and need it fast, facing a seven-point deficit to 17th-placed Cardiff. But with Newcastle a team currently blowing hot and cold they will fancy their chances. Derby, form book, window, etc.

Alan Pardew’s charges have gone from the ridiculous at Everton to the sublime at Aston Villa, and managed to combine the two in last Saturday’s 2-2 draw with Liverpool.

Pardew deployed flamboyant Frenchman Hatem Ben Arfa in a free role up front against the Reds, allowing the maverick to wreak havoc while limiting the damage caused by his defensive deficiencies. For 40 minutes the move was paying off.

Mapou Yanga-Mbiwa’s dismissal put pay to Plan A, and in truth the Toon were fortunate to avoid defeat as a profligate Liverpool scored from just one of their 15 second-half efforts. Yet the morale gained from hanging on for a precious point, on top of their performance in the opening 45 minutes, should stand Newcastle in good stead.

They will also be buoyed by the fact they have lost just one of their last 16 Tyne-Wear derbies in Sunderland's back yard, although nine have ended all square with three of the last five finishing 1-1.

Yanga-Mbiwa serves his one-match ban for last week’s buffoonery. Fellow centre-backs Fabricio Coloccini (groin) and Steven Taylor (hamstring) may not be ready to return, so goalscoring substitute and local lad Paul Dummett could be given the opportunity to line up against the arch enemy. “I know exactly what this game means to this football club – especially as I am a fan," he said. “I'll be doing everything I can to help the club." Left-back Massadio Haidara is nearing a return from a knee injury, but long-term absentee Ryan Taylor is still some way from recovering from his own knee woes.

The Black Cats only have Wes Brown on the sidelines after striker Steven Fletcher’s shoulder problem cleared up enough for him to feature at Swansea last week. Italian midfielder Emanuele Giaccherini, meanwhile, is relishing his first derby in England, saying: “It is like Roma vs Lazio, not Inter Milan vs AC Milan. In the Milan derby, both sets of fans really want to win but if they lose they shrug and move on. In Rome, whichever side loses the derby, it is very bad, and I know that that is what it is like here.”

Two battle-hardened midfielders never too far away from the referee’s notebook; their tussle could go a long way to deciding the eventual victor. Before his team were reduced to 10 men, Ivorian Tiote had bossed the centre of the park against Liverpool, leading the passing charts and teeing up Yohan Cabaye to break the deadlock. Tiote finished the game as top tackler as well as making 9 ball recoveries for his side, adding to his equally impressive defensive display at Cardiff a week earlier.

Sunderland could take few positives from their pummelling at Swansea, but Cattermole made more interceptions (7) than anyone else on the pitch. The 25-year-old has been restored to the team since Di Canio’s departure and displayed typically tenacious attributes in the defeats to Liverpool and Manchester United.

Poyet has previous for beating Pardew shortly after taking charge of a team. In November 2009, the Uruguayan’s managerial debut ended in an emphatic 3-1 victory for Brighton & Hove Albion, sweeping aside Southampton 3-1 at St Mary’s.

The pair have faced off in each of the past two seasons in the FA Cup, with Poyet’s Seagulls knocking Newcastle out on both occasions: 2-0 last term and 1-0 in 2012.

Pardew to be left still looking for a first win over the man from Montevideo as the spoils are shared on Wearside for the 10th time in 17 meetings, with at least one red card thrown in for good measure. 1-1.