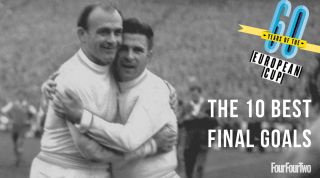 We all know Zinedine Zidane’s volley masterclass from the 2002 final, plus Dejan Savicevic, Lars Ricken, Ruud Guillit and Rabah Madjer (so maybe they're in our top 20 of all time, eh?), but what of the other best goals in European Cup final history? We fired up a time machine to find out…

A fine strike from the edge of the area – the equaliser in a come-from-behind 2-1 victory – made all the better by British Pathé’s fabulously plummy commentary. “Full-back Tommy Gemmell’s brilliant goal didn’t put new heart into Celtic, the old one was good enough to beat anybody,” cheered the upper-class gent as Britain had its first European champions. Jolly good show!

A lot was made of the battle between the Argentine and Cristiano Ronaldo before the 2009 final, but Terry Venables best summed up the mood, by tipping the latter because of his aerial prowess. “Messi couldn’t score a header,” the former England boss chuckled, “even if he was wearing a top hat.” Seventy minutes into the contest, the 5ft 6in Messi leapt to loop a fine header beyond Edwin van der Sar.

There has been some debate in the FFT office about how good this goal actually is. Certain non-believers have claimed this mid-air scissor kick was a mishit fluke that skewed off El Macca’s foot at a lucky angle. Don’t worry, dear reader, such heretics will be flambéed at the stake.

One match above all others tends to dominate the British agenda when talking about football in 1966 – but you’ve probably already heard plenty about Blackpool’s thrilling 3-0 victory over Northampton, so we’ll instead consider the European Cup final. Amancio’s mazy dribbling turned his Yugoslav marker inside out, before his cool finish cancelled out Partizan’s opener en route to Madrid’s sixth continental triumph.

Half Man Half Biscuit-approved Germans Monchengladbach were Europe’s premier aesthetes in the late '70s thanks to Gunter Netzer, Jupp Heynckes and Simonsen. The Dane’s equaliser – a left-footed thunderbastard before Zlatan Ibrahimovic ‘invented’ them – against Liverpool was a case in point. No wonder some hairy folk rockers from Birkenhead were so enamoured.

Thirty-six years into the European Cup – the last before it became the Champions League – Barça thought they were cursed. Twice runners-up, including six years earlier against Steaua Bucharest by missing every penalty in the shootout, the Catalans were nervous going into extra-time against Samp. Up stepped the Dutchman, crushing a free-kick through the onrushing Italian wall, to secure a first European triumph.

However special a goal is, it never looks as good if the keeper fails to make even a token effort at stopping it. Jinking through the Portuguese defence and rounding Jose Henrique, the Fifth Beatle paused before rolling his shot into an empty net, the Benfica keeper hurtling head first after it like a bobsleigh. It didn’t work.

It’s usually winning final goals that stick in the memory, but not this. The turn and pass from Kaka are so good you can’t predict it, even on the 8,347th watch, while Crespo’s finish is calmness personified. “Game well and truly over,” said Andy Gray on Sky Sports, the score 3-0. Cue a miracle.

Fondly remembered (FFT passim) in West London for the healing properties of a bit of cheese on the leg, Magath was once the beating heart of Hamburg’s midfield. In the 1983 final, the future Fulham boss’s deft feint and left-footed curler from the edge of the area proved he could play just as well as he can administer dairy products to a dodgy hamstring.

Still the high water mark of European Cup final brilliance, Los Blancos were so good they inspired a generation (and a young Alex Ferguson, in the Hampden Park crow that day as a ball boy). So dominant were Madrid that Di Stefano’s hat-trick goal was a beautiful, flowing move direct from the centre circle after Eintracht’s Erwin Stein had made the score 5-2. Which is just mean.

Skip to 3:07 for the hat-trick strike