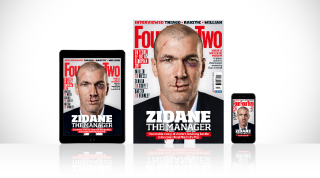 What's that? Zizou with a black eye? No, it's not Materazzi's revenge but the cover of the new FourFourTwo, and our inside story on Zizou the manager.

The ultimate Galactico may have been a graceful presence on the pitch during his playing days – even if he had a temper that contradicted his twinkle-toes – but things haven't quite gone to plan in the dugout so far with a bruising first season as coach of Real Madrid's Castilla under his belt.

Nonetheless, the evidence so far suggests a desire to prove himself worthy of the Bernabeu top job he seems destined for. In short, he's Real's Pep Guardiola – or at least trying to be.

FourFourTwo gets the lowdown from those close to him to find out whether the France legend has what it takes to boss Los Blancos.

Real Madrid (quelle surprise, or should that be qué sorpresa) won the very first European Cup 60 years ago. (In fact, they won the first five – is it any wonder they love it so much?) We commemorate Ol' Big Ears' sexagenerian shindig... or at least the best bits, anyway. It's a magical mystery tour from Muller to Messi and Bayern to... er, Burnley. Yes they really were in the European Cup once.

We also treat you to exclusive sit-downs with Barcelona's Ivan Rakitic, Bayern's Thiago Alcantara and Chelsea's Willian ahead of the group stage kick-off on September 15 to find out why this is their team's year to win the Champions League.

Premier League clubs will be hoping and praying that their latest signings aren't destined to join the less-than-illustrious list of football's most expensive flops. In the new issue we speak to Juan Seba Veron, Ade Akinbiyi and more about their big-money moves that went badly wrong. Some acknowledge the reasons why things went awry, while Bosko Balaban just blames Aston Villa...

This month's One-on-One takes us to a lengthy chat with funny man Jimmy Bullard, who also used to be a pretty handy footballer don't you know. What's his beef with England boss Roy Hodgson about? Why didn't he get that cap? Why does he really not like Nigel Pearson? And what's the best prank he's ever pulled?

FFT also investigates why, at the end of the day, footballers tell us they're just taking one game at a time, to be fair. It's our feature on media training and the art of saying nothing. Why won't players speak their mind, what are they afraid of, and are the media to blame? It's a fascinating feature, even if we do say so ourselves. Credit has to go to the gaffer and, of course, we couldn't have achieved it without our team-mates.

There's also Britain's best away day as FFT joins Motherwell fans for a trip to Hearts, and an Action Replay on the English top flight's first foreign manager, Dr Jozef Venglos. Was the Villa boss a dud or simply a misunderstood genius years ahead of his time?

In Upfront there's the top 10 transfer U-turns focusing on some of the world's most confused footballers, the Formby boys who are trying to unite Belgrade's rival clubs through beer (good luck with that, lads), World Cup winner Marcel Desailly answering some silly questions and football's weirdest crowdfunding projects revealed.

In Performance, Harry Kane provides his guide to upping your game, Aaron Ramsey offers his fitness tips and we issue advice on how to sleep your way to the top…