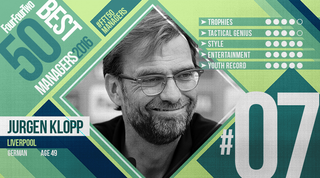 As the Liverpool squad filtered into Melwood for their first team meeting with Jurgen Klopp on an overcast early October morning, they must have wondered what the word scribbled in block capitals for all to see on the tactics board meant.

Was this the German’s damning assessment of his players? Or their start to the season? Or was he already having doubts about taking the job in the first place? As it turned out, it was none of these.

“Terrible,” Klopp explained to his players, “is how our opponents will feel after 90 minutes against us. We’ll do this by running faster than them, by pressing relentlessly to win the ball and counterattacking with pace and quality.”

After two-thirds of a season on Merseyside, Liverpool now undoubtedly resemble these Kloppian characteristics. Just ask Everton, shellacked 4-0 in April, or Manchester City, twice beaten in the Premier League last season. At their best, the Reds under Klopp are a thrilling representation of the 49-year-old’s ‘heavy-metal’ football that thrived in seven years at Borussia Dortmund.

Liverpool now have an identity again. Brendan Rodgers survived last summer with a job only in agreeing to the dismissals of Mike Marsh and Colin Pascoe, his position hanging by a thread. If a back four didn’t work one week, you could bet a 3-5-2, or variation, would follow seven days later. Tinkering had worked for Rodgers in nearly winning the 2013/14 Premier League, but now seemed muddled.

By contrast, Klopp knows what he wants and spelled it out from that very first team meeting. He plays with a back four and demands the respect he gives his squad through a magnetic personality. He’s unfailingly himself.

“I would never sign an asshole just because he’s great at football,” he once said. He wasn’t talking about Mario Balotelli, but he might have been.

“If you are full of motivation as a player, if you are full of concentration… I am open arms,” he said at his unveiling last year. “If you are not, of course I’m hard on players, but only because to work with players who don’t understand the professional part of this life is a waste of time.”

Klopp has brought a renewed sense of fun, and two cup finals, to a club stagnating under his predecessor. The incredible 4-3 Europa League home win over Borussia Dortmund – after being 2-0 and 3-1 down – recalled Saint-Etienne, Olympiakos and Istanbul in the Reds’ pantheon of European adventures.

Klopp’s feeling that everything would be alright achieved it. James Milner has spoken of his surprise at how calm his German manager was at half-time, their season seemingly imploding around them. Still, at 3-1 down with half an hour to play, Klopp remained convinced that his team would triumph.

“Sometimes, when the time is right,” he believes, “let things take their own course.”

Why, then, has he dropped a place to seventh on FFT’s list from last season?

The answer lies in those League Cup and Europa League finals. Liverpool lost both, to Manchester City and Sevilla. The six managers above Klopp in our list all won major honours in the last year. Unai Emery, the manager who went above the Reds boss in our 2016 ranking, beat Klopp’s Liverpool in the Europa League final and lifted that trophy for the third straight season.

For all the excellent football, the sense of purpose and brilliant quotes, silverware is how managers are defined and Klopp has lost his last five finals for Liverpool and Dortmund.

A fierce competitor, such a record is surprising. Klopp’s demanding father Norbert – who died from cancer in 2000 – raised his son to be a winner. The pair played tennis regularly, but Norbert never gave his son an inch. “Do you think I’m enjoying this?” Jurgen once blasted at yet another 6-0, 6-0 trouncing. “Do you think I am?” came the retort. It was the same on the ski slopes, Klopp Snr’s red anorak disappearing into the distance while young Jurgen tried to keep up.

This summer has brought fresh investment in the playing staff. The new season must also bring success, proof that the new contract signed a month ago was worth it.

“I came here because I was really convinced about the quality of these players. At the start I was the only person who thought this but that’s not a problem,” said Klopp before the Europa League final against Sevilla. “I don’t feel the pressure. I cannot change. I feel opportunity.”

He feels like the underdog. He did at Mainz and Dortmund. Klopp likes being the underdog. Coming back from adversity is his motivation.

“Crises are part of football. It’s then that you learn to value success,” Klopp once said. “You can lose. You can lose again. And again. But you can always win the game after that. And that’s what’s so great about it.”

It’s an attitude like this that Liverpool fans will hope can bring silverware in 2016/17. An attitude that others notice.

“I'm worried about him,” laughed Sir Alex Ferguson earlier this year. “He's going to make a difference at that club with his personality, drive and knowledge. Things are looking up there.”