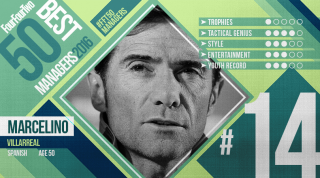 Up, up and up. Villarreal have improved every year since the arrival of Marcelino Garcia Toral in 2013.

The former Sevilla manager arrived when the Yellow Submarine were submerged below the promotion spots in Spain’s Segunda Division after an unprecedented relegation, yet ended last season with a Europa League semi-final appearance to his name and Villarreal securing a Champions League berth in fourth place.

The trajectory of the team from tiny Castellon has been staggering in such a short space of time, and it has been largely down to Marcelino’s astute style of management and keen eye for the small details.

Blessed with a fine scouting infrastructure already in place at the club, he has continued to make sure Villarreal remain a club where players can go to develop – but also one where they can win.

They aren’t a mere stepping stone club, and have instead become a true force in Spanish football once again under Marcelino. His diligent work under the constraints of modest finances has nudged him into the limelight as a future Spain coach, and at 50 years old there is still much for the Asturian to accomplish yet.

The coach is always eyeing bigger and better things, looking to improve both himself and his team.

At Villarreal he has merged their traditional blend of stylish, attacking football and given it an edge. The Yellow Submarine are torpedo-like on the counter-attack, direct, and pack a real impact. Defensively they are sounder than ever thanks to Marcelino’s insight.

His direct work with his players has been a factor too – he’s helped both up-and-coming players and seasoned veterans make their marks, which in turn has earned his club a pretty penny too.

Luciano Vietto joined Atletico Madrid for €20m after exploding under Marcelino, Gabriel hot-footed it to Arsenal (€13.5m), Denis Suarez re-joined Barcelona, and Eric Bailly has just completed a dream €36m move to Manchester United off the back of one strong campaign under the Spaniard’s tutelage.

Elsewhere, Roberto Soldado has got his own career back on track after disappointing in England, while the 32-year-old Bruno impressed enough to land a place in Spain’s Euro 2016 squad. He immediately became Marcelino’s general in midfield and has been influential in their comeback.

It’s evidence of how well Marcelino works with a variety of players and backgrounds – rarely does he clash with his charges. In the press room meanwhile, few are more insightful than the Villaviciosa native.

Villarreal’s run in the Europa League, before they were dumped out by Liverpool in the semi-final second leg, showed that Marcelino could handle the big stage too.

With the fourth-place finish in La Liga, Villarreal return to the Champions League for the first time since 2009 when Arsenal ended their progress at the quarter-final hurdle.

Next year they could be seen as real dark horses in Europe – Marcelino has made them difficult to beat – and in the league they remain a key member of the chasing pack. The search for an elusive trophy goes on, but it’s a hoodoo they are closer than ever to eradicating.

Players come and go at Villarreal as ever, but Marcelino’s success has been constant. As long as he remains, the Yellow Submarine’s trajectory will continue upwards.