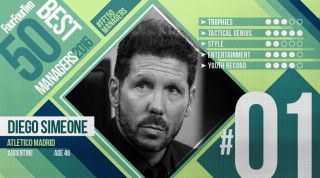 “Once you’ve been in the shit, you must always remember – never forget – so when you’re doing well, you push forward to never be back there.”

That’s one of the premises shared by Diego Simeone in his recent autobiography Creer (‘Believe’).

When he was appointed at Atletico Madrid in 2011, his side was closer to relegation than to European Cups and he was convinced that the only reason to call him was to take the pressure off the board.

But El Cholo seized the opportunity and not only transformed the team and their identity; he also set a new paradigm in a worst-case scenario, precisely when football science had decided that, thanks to Guardiola’s magnificent Barcelona, nearly everything was about ball possession.

Simeone was having none of it, respectfully saying that he didn’t care about possession or high pressing. Suddenly, a league that was supposed to be for two became open for three. That third side was noticeably weaker in resources and budget, but had firm ideas. You might like his football style or not, but you can’t argue against its existence, nor against its results.

But it’s Simeone’s European campaigns, first in the Europa League and then in the Champions League with two final appearances, that really made him the best manager in the world.

“Football is a game of errors,” he once declared. “The fewer mistakes you make, the closer you are to a victory. It’s a lie that he who attacks the most is closer to winning. It’s he who makes the fewest mistakes. And for that we work on what we feel are the opposition weak points.”

To improve the sense of pluralism and team effort, Simeone never uses the word ‘I’. It’s always ‘We’.

Unlike other managers that enjoy a golden generation of players, the Argentine inherited an average squad and was forced to rebuild his team every season: unsurprisingly, none of the players sold (Radamel Falcao, Arda Turan, Filipe Luis, Diego Costa, Miranda) remotely reached the level they had previously shown under Cholo’s stewardship, yet the team’s core and style never diminished. On the contrary – it became stronger.

“I prefer to enhance the attributes of my footballers, because I understand that it helps me to victory,” Simeone writes. “I don’t want to seduce the critics, I want to seduce my players: my best investment is in them, because they are the only ones that allow you to keep going forward and getting better.”

For someone who only cares about victories, losing two Champions League finals can be devastating, but Simeone – always positive – is eager for more as long as he identifies with the cause.

“[Marcelo] Bielsa used to say that a good team must even know how to play badly,” he recalls. “In every game there’s a moment of ruling, of being ruled, of taking control… and the team must know how to react to those moments. Without teamwork, without preparing to suffer as a unit, those hours will be worse.”

Since his arrival in Europe – after winning titles with Estudiantes and River Plate in Argentina – Simeone has not only proved to be a great tactician but a fine strategist too, someone whose long-term analysis is superior. He enjoys the build-up of a winning campaign most, rather than the decisive game that can lead to a title. That’s why his side plays every game like a final from day one.

“As a player, I felt that football was a war and that I had to kill the opposition – all figuratively speaking, of course,” says Simeone. “I needed to be stronger, to run more, to take his space, to beat him.

“It’s like a street fight: there comes a moment when one of the two shows fear in his eyes, and that moment is precisely when you sweep them. You’re not always superior, sometimes you’re inferior, but you were capable of arousing fear.”

You can recognise Simeone’s words in his current team – they don’t care whether they’re playing a third division side in an early Copa del Rey fixture, or Bayern Munich in a Champions League semi-final.

Commitment and communion are vital for him: Simeone’s Atletico Madrid are all his. He owns them, controls them, rebuilt them from scratch, knows how to embrace the fans and make them a global success, and uses it as fuel to go further. El Cholo is to Atletico Madrid what Steve Jobs was for Apple.

Oddly, he has never even finished runner-up in FIFA’s Coach of the Year Award, despite the common agreement that no one wants to face his side. When asked about it three years ago, he jokingly replied: “If they don’t pick us then we must be doing something wrong, but we thank them because it will make us try harder.”

In a recent interview with newspaper La Nacion, 1978 World Cup-winning coach Cesar Menotti said: “A manager is the chief of a command troop. He must prepare the soldiers, and use them accordingly. If the manager knows that a soldier is good with the pistol, but then puts that soldier in the kitchen and sends the cook to the battlefront, then he’s a moron.

“The first rule of a manager is to find footballers who represent his ideas. The players are then the ones that defend those.”

Simeone’s greatest gift was to create an elite troop with guys that worked in the kitchen. They are now the soldiers who defend a manifesto with only one word: winning.