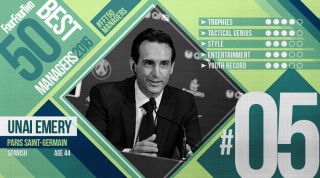 Unai Emery arrives at Paris Saint-Germain as a vastly experienced, vastly consistent coach. He has won the Europa League three times in a row with Sevilla, having previously taken Valencia into the Champions League three years running. Most amazing of all? He’s still only 44.

The Basque manager has been on the scene for a decade now, in which time he has made a name for himself as one of club football’s brightest and most dedicated professionals; a man obsessed with details and obsessed with his trade. Now he’s at one of the world’s richest teams.

Emery has a remarkable CV already but his new job opens up a whole new level of potential. Having always been under instruction to keep costs low and accept the sales of his star players, he is now at a club with seemingly endlessly financial resources. The sky’s the limit.

Emery has always been a manager in his mind. He took his coaching badges while playing in the lower divisions, because, as he put it himself: “I had a feeling that coaching was inside me.” And he was right. When injury forced him to hang up his boots in 2004, at the age of 33 and playing for tiny third-tier Lorca, the club immediately named him their new coach.

In his first season he took them up to the Segunda Division against all odds. In his second, Lorca very nearly completed another promotion to La Liga. All the while, they were playing attractive football. Successive promotions would have been one of the biggest sensations in Spanish football history.

Emery left fifth-placed Lorca at the end of that campaign, joining Almeria in the same division. The very next season, Lorca were relegated back to the third tier. Six years later, they ceased to exist.

Lorca’s loss was Almeria’s gain. Emery’s alchemy continued as he led another team to a remarkable rise: Almeria won their first ever promotion to La Liga in his first season, 2006-07, then finished eighth in his second, ahead of established giants Valencia and Athletic. It was a truly incredible achievement with a limited squad. It’s also, impressively, Emery’s lowest ever league finish in a full season as a manager.

Under Emery, Negredo became of the best strikers in Spain. The pair would later reunite for a special half-season at Sevilla, where Emery’s arrival prompted Negredo to score 17 goals in 19 games – including a hat-trick against Celta Vigo and all four in a 4-3 win over Valencia – which earned him a move to Manchester City.

But first, for Emery: Valencia, where he could make his name on the biggest stage.

Valencia needed fixing after the disastrous Ronald Koeman tenure. Arriving in 2008, Emery – then 36 – not only took his new team up the table, as he is wont to do, but also turned decent talents into bona fide superstars. He got the best out of David Villa and David Silva, while also turning Juan Mata into a majestic player.

In the summer of 2009, 20-year-old midfielder Ever Banega and 19-year-old defender Jordi Alba returned from anonymous loan spells elsewhere. Emery made them sing.

Jeremy Mathieu was just a jobbing utility man picked up from Toulouse, but the way in which he and Alba played together on the left flank, each ready to be a full-back or a winger at any given moment, was breathtaking.

In 2010, Roberto Soldado arrived from Getafe and became even more of a goal machine under Emery. The list goes on.

Valencia finished third behind Barcelona and Real Madrid for three successive years, from 2010 to 2012, but Los Che fans weren’t satisfied. They didn’t understand that this was the absolute limit, the highest Valencia could possibly go, and frequently criticised Emery towards the end of his tenure.

He never tried to hide, though. Quite the opposite, in fact. As Valencia were being thrashed by Real Madrid at Mestalla in 2011, the manager came out to the touchline so that supporters could whistle him. “I couldn’t leave the players alone,” he explained. “I had to take responsibility.”

Emery feels responsible for everything at his clubs. He wants every player in his squad to improve and be in top condition, and not just the first XI. The Basque coach once said that choosing a line-up should be the last decision made, as he wants it to be as difficult as possible. It’s easy to see why most of his players respect him so highly.

That doesn’t mean working under Emery is easy. Not at all – he is very demanding, and his infamous video sessions can drive players mad at times. Joaquin summed it up well: “The coach showed so many videos that I ran out of popcorn.”

Emery spends at least 12 hours watching and analysing every opponent, and gives very specific instructions to each player. Eventually, most of them understand that such an attitude helps them to improve.

That mentality didn’t work in Russia. When Emery left Valencia to take the reins at Spartak Moscow, he had to start again in terms of earning respect; indeed, striker Artem Dzyuba contemptuously called his new boss “our little coach”. The outsider was fired after six months.

He refused to be affected, though, by what was arguably his first real disappointment in management. Emery cannot live without work. Sevilla, with the brilliant Monchi as sporting director, were the perfect project.

At Sevilla, back in Spain where he belonged, Emery thrived once more.

He helped Ivan Rakitic, Carlos Bacca and Grzegorz Krychowiak to become major stars, nurtured the talents of Vitolo, Aleix Vidal, Vicente Iborra and Kevin Gameiro, and while results in La Liga weren’t always positive (Sevilla, incredibly, were the only team in the top five European leagues without an away win in 2015/16), his European record with the club speaks for itself.

A thrilling 3-2 win over Dnipro in the 2014-15 Europa League Final followed the previous year’s penalty shootout triumph over favourites Benfica, before Emery and Sevilla made it three from three in May this year. Los Rojiblancos were trailing Liverpool at the break, but their manager had one more piece of magic in him. Whatever Emery said at half-time worked, as a superb second-half fightback saw Sevilla prevail 3-1.

It would be Emery’s final match with the Spanish club. PSG swooped for the man they feel matches their ambition. Now he brings his methods to the French capital as the superclub seek Champions League glory.

Is Emery up to the challenge? Only time will tell. But you wouldn’t bet against it.