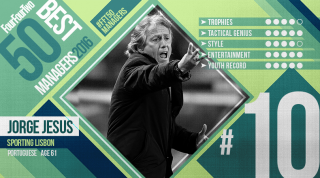 Despite not winning silverware in his first season as Sporting manager in 2015/16, Jorge Jesus’s reputation as one of Portugal’s best current coaches remains largely unblemished.

The charismatic 61-year-old sensationally walked out on Benfica and signed for fierce Lisbon rivals Sporting last summer, vowing to make the club he represented as a player – who had not won a championship title since 2001/02 – a major contender for the top prize in Portugal again.

The Lions came desperately close to ending that long barren run, breaking a series of records along the way. Sporting accumulated 86 points, their highest ever total, losing just twice and ending with nine straight victories in the Primeira Liga. In all competitions Sporting won 36 matches in the season – another club record.

From an individual point of view, Jesus oversaw remarkable transformations in the productivity of several players, most notably club captain Adrien Silva, midfielder Joao Mario and striker Islam Slimani, all of whom reached levels few thought were possible.

But it still wasn’t enough, as Benfica put in an even more impressive run to win the league by two points. “Sometimes the best team doesn’t win,” said a typically ungracious Jesus after the Eagles’ triumph had been confirmed.

His side had led the table for 22 of the 34 weeks of the domestic campaign, beaten Benfica in three out of their four meetings during the season, and his failure to capture a third straight title in Portugal clearly rankled.

He also frequently boasted that Benfica’s success was down to the foundations he had laid, famously saying that he was “the brain” behind any success his main rival enjoyed last term. For the man who has regularly claimed to be the best football coach in the world, and who simply doesn’t do modesty or humility, his statements were anything but surprising.

Like all great managers, Jesus hates losing. He was the single most important figure in shattering Porto’s three-decade long hegemony of Portuguese football, winning the title three times in six seasons at Benfica. With a little bit more luck that would have been five championships, the Eagles twice letting leads slip early in Jesus’s reign at the Estadio da Luz.

Jesus’s sustained success at Benfica was all the more praiseworthy given he would lose his best players year after year. The likes of David Luiz, Fabio Coentrao, Angel Di Maria, Axel Witsel and Enzo Perez were all sold for huge transfer fees after developing brilliantly under Jesus’s watchful eye.

The Benfica faithful enjoyed a significant haul of silverware under JJ (10 trophies in six years), but just as important was the stylish football produced by his teams. Attack-minded to the point of recklessness, it was never anything but breathless entertainment, true to the club’s forward-oriented traditions. In six full seasons at Benfica, only once did the team fail to score in a home game in the league.

Unravelling his own work

He clearly took that magic to Alvalade, with Sporting playing barnstorming football for much of last season and prompting many to agree with Jesus’s assertion that it was the green half of Lisbon – not the red – that was more deserving of the title.

But the table doesn’t lie, and after a bad start Benfica’s astonishing run of results (25 wins, one draw, one defeat in their last 27 league games) made them worthy champions.

Jesus has already broken the stranglehold exercised on Portuguese football by a single club once, when Benfica took over the mantle of top dogs from Porto.

To maintain his reputation as the best coach in Portugal he needs to do the same thing again, and guide Sporting to victory ahead of their three-time champion rivals. Don’t bet against him.