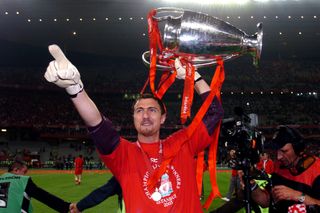 I’d just started my Feyenoord career so didn’t have much experience, and we’d lost 5-1 away [in the group stage] against a great Juventus team that included Zinedine Zidane. No one gave us a chance but I redeemed myself in Rotterdam, making a few saves, and we won. It was a sign of great things to come for me in the Champions League.

One of my first games for Poland. We played the world champions, but only lost unluckily at the end from Zidane’s free-kick and a ricochet. I had a good game and Arsene Wenger came up to me afterwards and congratulated me. After that Arsenal offered £10 million for me, but Feyenoord said no and six months later sold me to Liverpool. My career could have been very different!

Probably one of the most unbelievable games in the history of sport – a lesson of faith, courage and never giving up. In the first half of that Champions League final they killed us, but then at half-time Liverpool fans started singing You’ll Never Walk Alone. Steven Gerrard brought us together and said: "Do you hear that, lads? Now let’s go out there and give it our best." And we did. That game in a sense made us all immortal.

I was backup for Iker Casillas at Real. We’d already won the league, so I got to play at Zaragoza. They had to win to stay up, but I hadn’t played too often and didn’t want to lose. In the second half I was in a trance and made some great saves. Their players were saying: "What are you doing? Have mercy!" The Zaragoza fans are still upset about it...