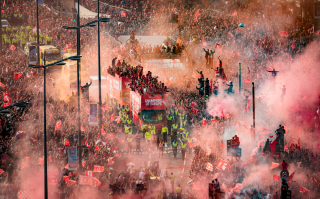 Monday, May 18, 2020 was a date many Liverpool supporters had marked on their calendars.

“I booked the day off work months ago,” says season ticket holder and Anfield tour guide Danny Dwyer. “I told my girlfriend to as well. It was supposed to be a very special day.”

It was supposed to be the day Liverpool’s players paraded the Premier League trophy around the city, repeating the scenes of last summer when Jurgen Klopp’s side arrived back from Madrid with the European Cup and were greeted by 750,000 Reds.

“My girlfriend’s a Leeds fan so she’d never seen anything like it!” jokes Dwyer. “She said it was unbelievable, seeing the city centre packed with supporters, partying, welcoming our heroes home.”

ON THE KOP "Remember, bigheads, we need to go and win it again!” How Liverpool reacted to their last title victory

LONGREAD How the Liverpool empire came to crumble – the whole story of the Reds’ last title win, 30 years on

After 30 years without a title it would have been some party, and with Liverpool in the unique situation that the club, the fans and the city itself could prepare for it months in advance thanks to their incredible lead at the top of the table, the planning was well underway.

Hotels in Liverpool were booked up in February as Klopp’s side extended their lead to 22 points – a lead that has since become 25 points. Apartments in the city were starting at over £1,500. Everybody wanted to be there for what would be a momentous occasion.

Fans from around the world had booked flights to be in the city that weekend despite the team’s final game of the season being away to Newcastle. The trophy would have been presented at Anfield a week earlier, after the final home game, against Chelsea.

Never before had a club had such a lead at the top of the Premier League table that they could plan for such an event, with the matter being of when, not if, they won the title.

Behind the scenes, there were discussions over an event, or two, from the popular BOSS Night, who provided the incredible scenes in the fan park in Madrid ahead of the Champions League final and launched Jamie Webster to fame.

And then the coronavirus pandemic struck with Liverpool six points away from securing the title. Plans had even been discussed at the Premier League for the trophy presentation to be brought forward to the Crystal Palace home game – which was just nine days’ away when the Premier League was suspended in March. Wins over Everton and Palace would have confirmed Liverpool’s 19th title.

Now, Liverpool players and fans face the inevitability of the team winning the league in an empty stadium behind closed doors.

Emile Heskey enjoyed three victorious cup finals and a parade to mark their success in 2001 and shared his views with FourFourTwo: “You’re doing it for the fans and the people. It’s 30 years. Finally you get there and nobody being able to cherish it with you is a difficult one.

“The open top bus tour isn’t going to happen, no fans in the stadium when you finally get over the line, it’s bittersweet isn’t it? It’s just disappointing.”

The Premier League have said this week that they do hope to be able to have a trophy presentation for Liverpool of some sort, but how that would look is far from the scenes that thousands of supporters have dreamt about for the last three decades.

“Of course the ideal situation would be a full Anfield at home,” former goalkeeper Sander Westerveld tells FourFourTwo. “Then for half a million fans to have an open top bus tour around Liverpool, showing them the cup they have been waiting for for 30 years.

“But if this is the way we have to do it, in an empty stadium, just make sure you get those two wins out of the way, win the title and everyone can have that feeling.”

“We just have to delay the party,” says Westerveld, another who enjoyed success in 2001 with the Reds.

“We say ‘we should wait’, but we don’t know when we’ll have fans in the stadiums again, or when we’ll be able to have mass gatherings,” admits Heskey.

So perhaps the best thing for Liverpool would be that the anticlimactic end to this season provides the catalyst to ensure they win it again next season and then have a double celebration.

“I don’t see any reason why they can’t win it next season, too,” says Barry Venison, one of the members of the last Liverpool squad to win the title back in 1990.

“They’re in a real good place, the feeling of togetherness, the hunger, and the love of the manager, the mutual respect - there’s a lot of similarities [to during the 1980s].”

With the impact of the pandemic putting uncertainty across every facet of life, football and in particular football finances will likely be affected. Most analysts suggests clubs will not spend huge sums this next transfer window, whenever that is, and the transfer market could somewhat crash.

For Liverpool’s main title rivals, Manchester City, it’s compounded by the fact that currently they are suspended from European competition next season. Pep Guardiola has an ageing squad, David Silva is leaving at the end of this season, Leroy Sané seems certain to follow him, and Sergio Aguero turns 32 this summer.

With the uncertainty over their participation in the Champions League, Guardiola’s own future at the club, and the financial impact of the pandemic, it’s feasible that City will struggle to rebuild their squad in order to compete with Liverpool in the 2020/21 season.

Liverpool, meanwhile, have a squad with players in their prime years and no such concerns. There is reason for supporters to be very optimistic about the club’s future when we return to normality.

In the meantime, the end to this season may be far from what was dreamt, but it does give time to appreciate the game of football for its purity. “We all started playing football without supporters, we loved this game not because of the atmosphere in the stadium,” says Klopp.

“That doesn’t mean that the game isn’t still a wonderful game.”

The wonderful game will return, Liverpool will be champions. And 12 months from now they could be celebrating winning back-to-back titles for the first time since 1984.