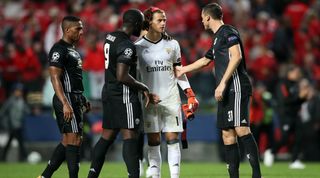 Mile Svilar became the youngest goalkeeper in Champions League history when he made his debut in the competition on Wednesday night.

Benfica lost 1-0 to Manchester United in the Group A clash at the Estadio da Luz, with the young Belgian making a crucial error to hand United victory.

In the 64th minute, Marcus Rashford's inswinging free-kick was caught by Svilar, but the teenager ended up carrying the ball into his own goal. In a game with few opportunities for either side, the blunder proved costly, as United maintained their 100 per cent win record in the group.

After the match, Svilar's compatriot Romelu Lukaku provided him with some comforting words – as did the likes of Ander Herrera and David de Gea.

"But we had stats and information about set-pieces, so we needed to make him uncomfortable. At corners we tried to crowd him and put him under pressure, and from free-kicks we knew he risks a lot. A lot.

"Only top keepers risk like he does. We got lucky."