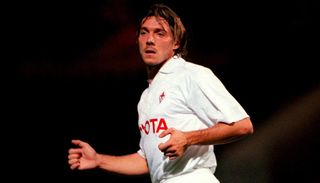 Mauro Bressan scored few goals in a career that spanned 20 years and nearly 500 games – yet one placed him in Champions League folklore.

Bressan’s overhead kick for Fiorentina in their European tie against Barcelona remains one of the greatest of its kind. “A lot of people remember the goal,” says the Italian, “and remind me of it when they meet me.”

With the score 0-0 after 14 minutes in their group game at the Artemio Franchi stadium – a thriller that ended 3-3 – Barça appeared to have cleared the ball from danger. Then Bressan, surrounded by players, went for the spectacular. Launching himself into the air with his back to goal, the midfielder made a perfect connection and sent the ball flying into the top-right-hand corner of Francesc Arnau’s goal.

“It probably seemed a bit crazy at the time,” he recalls, “but I wanted to try it because I had attempted it a few times in training with not much success.” Good thing he did.

“It all came down to the way I hit it, and that came about through co-ordination, then connecting cleanly with the ball,” he continues.

Bressan’s utterly shocked reaction to the ball hitting the back of the net is also fondly remembered, and not just by Fiorentina fans. “I have wonderful memories of my goal in Florence,” he says. “When I got back onto my feet I just started screaming.”

And as if that wasn’t enough already, Bressan went on to lay a perfect assist later in the game, flicking through a deft backheel for Abel Balbo to slot home.

But it’s for his audacious strike that he will always be remembered.

This interview originally featured in the January 2012 edition of FourFourTwo magazine. Subscribe!