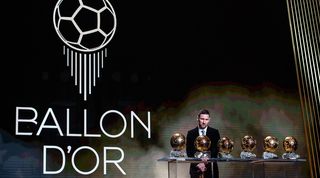 The margin of victory may have been narrower than he's used to, but it was no surprise that Lionel Messi won the 2019 Ballon d'Or on Monday.

The Barcelona forward fought off strong competition from Liverpool defender Virgil van Dijk to scoop the prize for a record-extending sixth time, which places him one clear of long-time rival Cristiano Ronaldo, who finished third this time around.

Messi, Ronaldo and Van Dijk received the bulk of the votes from the 176 participating journalists from across the globe. Each respondent was asked to pick a top five, with their No.1 choice receiving five points, their No.2 awarded four and so on.

How Lionel Messi finally became the player he was expected to be (no, really)

Yet while most journalists plumped for one of Messi, Van Dijk or Ronaldo as their top pick, others deviated. The Guatemalan voter didn't even have Messi in his top five, instead choosing (in order) Alisson Becker, Van Dijk, Frenkie De Jong, Roberto Firmino and Salah. We wonder which club he supports...

Lebanon's candidate did go for Messi in first place, followed by... Riyad Mahrez?! The Serbian journalist included Dusan Tadic in his top five, which may or may not have something to do with the fact the Ajax forward is a Serbia international. He also had Mahrez in fifth and could not find space for either Van Dijk or Ronaldo in his leading quintet, which is almost as barmy as the Togolese journalist's decision to pick Hugo Lloris as his No.3.

But there's only one winner when it comes to bizarre voting decisions. The Sri Lankan representative nominated Trent Alexander-Arnold as the best player in the world for 2019, as well as awarding points to Pierre-Emerick Aubameyang, Antoine Griezmann, Robert Lewandowski and Marc Andre ter Stegen. Well, at least he's original...

ANALYSIS How can Ole Gunnar Solskjaer become more than just a post-Mourinho manager?

HOW TO Watch Amazon Prime Premier League fixtures for FREE