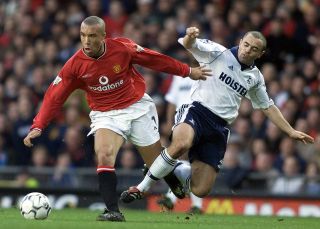 Sir Alex Ferguson was never one to shy away from confrontation. The Scotsman's "hairdryer" treatment of players was the stuff of legend.

But when it came to Ferguson losing his temper, perhaps no story is more famous than the time he kicked a football boot at David Beckham in 2003, gashing the England captain's eye.

Former United defender Mikael Silvestre was in the dressing room that fateful afternoon, with Manchester United having just lost in the FA Cup fifth round ito Arsenal in February 2003. A Beckham mistake had led to the first goal and, while Fergsuon was furious, the French defender believes there was no intent.

"Yes, I was there," Silvestre tells the Summer 2020 edition of FourFourTwo, available now. "Everyone was shocked, but things like this happen in dressing rooms. It was a random kick by the boss – it was just unfortunate that the boot went straight into Beckham’s face!"

The usually mild-mannered Beckham didn't take the offence lying down, and Silvestre believes the incident may have led to Beckham's departure to Real Madrid a few months later.

"He was very angry; we had to intervene to prevent a confrontation," he recalls. "But that was the end of it then. Still, it impacted their relationship, and was probably among the reasons why David left that summer and signed for Real Madrid."

Beckham would go on to win a La Liga title in the Spanish capital, but Silvestre has no doubt about the important of the man who stayed in charge of the club following the incident.

"He was obviously very passionate about the game,' explains Silvestre. "Where he also stood out was in his capacity and willingness to give his assistants loads of responsibility, in terms of training and building the team for games. It was good, because every now and then the routine would change when we had a new first-team coach. It meant we were introduced to different footballing cultures, with different ways of thinking and different ways of match preparation. It was another reason why he was successful, and one element of his longevity at the club. The hairdryer treatment wasn’t a big thing, honestly. I mean, other managers do it as well, but with him it was famous. It wasn’t his main style."

Read the full interview with Mikael Silvestre in the Summer 2020 issue of FourFourTwo magazine, available in shops and online from now. Our new magazine looks at the 99 things you’ve forgotten about the noughties, from battles to beach balls, looking at the decade that revolutionised the game as we know it; we examine the golden generation and where it went wrong for England, look over the extraordinary decade of Thierry Henry, remember the fall of ITV Digital, the highs and lows of Harchester United - the fictional side from Sky’s popular drama Dream Team - and look at the formidable partnership of Kaka and Andriy Shevencko over in Milan. We also chat to Jerzy Dudek, Jimmy Floyd Hasselbaink, Alan Stubbs and Fredi Kanoute.