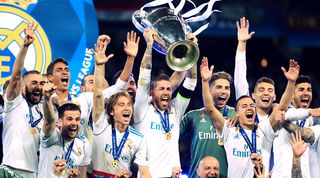 Seven minutes are on the clock and there are 30 clubs to guess.

Remember to tweet your scores @FourFourTwo, and challenge some friends too!

Quiz! Can you name the home stadium of every club in the Premier League and Football League?

Back in the day, any team could win the old First Division of English football. Nowadays, it's the usual suspects - except for that one year that Jamie Vardy had a party.

Despite the old myth, the same clubs have tended to be towards the top throughout history - and we're not just talking about England, either.

Scotland, for example, has had the same two teams reigning supreme for over a hundred years, save for a few fallow years. Spain, too, is dominated by a deadly pair more often than not.

Feel for the other teams in Egypt, who have had to compete against a side who have lifted 118 trophies in their history - that's 118 more than Harry Kane has won.

Once you've named the big ones in Europe, things might become a bit tricky. Have a think of those who've competed in the Club World Cup, and you should be fine, right?

MAGAZINE In the mag: Mourinho vs the World! Plus Mané, Mendy, Kovacic, Iniesta, Rio, Baptista, EFL old boys and more