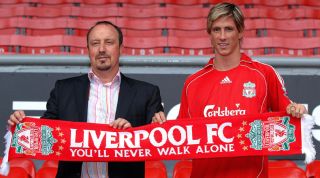 Liverpool made a major statement in the transfer market last summer, and the four players at the top of this quiz have all arrived since January 2018. The Anfield club have spent over £200m in that time, and briefly broke the world record for a goalkeeper before Chelsea blew it out of the water.

It's so far, so good for the Reds since then – they currently top the Premier League table by two points ahead of Manchester City (albeit having played a game more) and face a huge test of their title credentials against Tottenham at Anfield on Sunday.

In the past, Liverpool’s transfer business has veered between the inspired (a fair few attackers stand out over the past decade) and rather woeful (no offence, Monsieur Houllier).

We’ve listed their 50 biggest ever signings as they currently stand, alongside the widely reported transfer fee at the time. Plus the selling club, which was easier for us to research (mainly because it’s usually just Southampton).

All you need to do is fill in the player surnames, then let us know how you got on @FourFourTwo. It’s not easy, so feel better about your score by challenging your pals to do it as well. Ten minutes are on the clock… and go!

RANKED! The 10 best forwards in the world