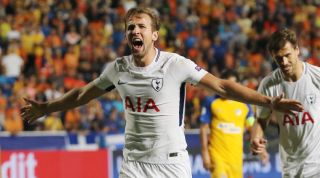 This week, a certain red-hot Tottenham striker further enhanced his growing legacy with a hat-trick in Europe’s top club competition (one clue: it wasn’t Vincent Janssen).

The Champions League originated in the early '90s and - unlike the rebranded Premier League - they were actually tweaking the set-up of the competition as well as just its name. Group stages were gradually being phased in to ensure that big clubs couldn't go out too earl… sorry; to ensure a broader and grander competition.

It’s certainly resulted in an explosion of games, and of course goals, with Premier League clubs cashing in to the tune of 23 hat-tricks. But can you name the players who’ve scored 'em?

Below is every hat-trick scored in the Champions League for a Premier League club. Five minutes are on the clock, so get guessing. Let us know how you got on @FourFourTwo – and challenge a trio of pals to do it too.