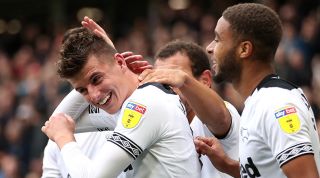 Not only is Reach versatile – he can operate as a winger, full-back or in central midfield – but he also happens to have arguably the sweetest left foot outside the Premier League.

So far this season the 25-year-old hasn’t been afraid to use it either, netting three times from outside the box – including a couple of long-range screamers against Leeds and West Brom which are genuine goal-of-the-season contenders.

The Owls star is strong, dynamic and incredibly dangerous with the ball at his feet inside the final third. Right now, he’s on fire.

The Blades broke their club record to buy Egan for a fee in excess of £4 million from Brentford last summer, and the defender is proving to be worth every penny.

Playing in the middle of a back three and often acting as a sweeper, the 25-year-old exudes calm authority. A terrific reader of the game, assertive in his decision-making and a wonderful passer, Egan is instrumental to the way that Chris Wilder likes his expansive side to play.

The Irishman has been a model of consistency, and Sheffield United have a strong chance of achieving promotion if he stays fit.

Marcelo Bielsa has a reputation for improving individuals, and Poland international Klich is a case in point.

Effectively abandoned by ex-Leeds manager Thomas Christiansen – he was sent out on loan to Utrecht after failing to impress – the 28-year-old midfielder has been a revelation upon his return to Elland Road.

Klich is revelling in his new role as a box-to-box operator, and his energy, intelligent movement and astute decision-making mark him out as one of the division’s best. With four goals and three assists, the Pole is proving to be the all-round package.

Having scored six times and provided a couple of assists from a No.10 position already this term, it’s with little wonder that Dack’s name has been linked to a clutch of Premier League outfits.

He is unquestionably Blackburn’s key man. Nobody at Ewood Park takes more shots, creates more chances or delivers greater end product than the 24-year-old, who made his name at Gillingham in League One.

Playing in behind striker Danny Graham, the gifted Dack has a knack for timing his runs into the box to perfection, and once in those positions he is a cool finisher.

The on-loan Chelsea teenager has enjoyed a sparkling start to life in the Championship, providing skill and guile in spades for Derby.

Mount is always willing to try his luck with shots from long range, and there's an air of Frank Lampard about his style, so it’s no surprise that his new manager is looking to build the Rams around their talented 19-year-old midfielder.

Mount oozes class in possession, has a quick footballing brain and knows where the back of the net is. With five goals in all competitions (three in the Championship), he is very much their go-to guy. A senior England call-up has been his reward.

Already a shining star for Brentford at 22, the future looks incredibly bright for forward Watkins. Last season’s Championship Young Player of the Year began 2018/19 in sensational fashion, scoring a quartet of eye-catching goals by September 1.

Quick, mobile, well balanced and capable of striking the ball cleanly with either foot, Watkins has all the tools he needs to hurt opposition defences.

He is primarily used as a left-sided forward, but is also able to play as the lead striker whenever the Bees need him to switch roles. Simply, he is Premier League material.

Bielsa said Hernandez is “one of the best players in his position that I have worked with in my career”, and that is high praise indeed from a man who’s coached the likes of Alexis Sanchez and Dimitri Payet.

Before the Spanish winger picked up an injury at the end of August, it wasn’t difficult to see why the Leeds boss was so rich in his praise. Hernandez tormented every full-back he encountered from from his wide-right position, and the 33-year-old was just about unplayable.

The irresistible Spaniard was beating his markers for fun, supplying a lorry-load of chances for team-mates, and had made two goals and scored three more from just five starts. His impending return is bad news for the rest of the division.

Darren Moore’s shrewd use of the loan market has helped propel West Brom into the promotion mix, and his decision to swap Salomon Rondon for Gayle is looking like a masterstroke.

The ex-Peterborough striker has formed a scintillating partnership with Jay Rodriguez, and has eight goals in 10 starts so far. Gayle has netted with a variety of strikes, and the 27-year-old’s work rate, movement and razor-sharp instincts in and around the box set him apart from most strikers at Championship level.

September’s player of the month is well on course to score over 25 goals for the Baggies.

Having bagged 10 goals in 10 starts, at a rate of one every 85 minutes, French hitman Maupay is currently the most lethal marksman in the Championship.

His coolness in front of goal is remarkable: Maupay has hit the target with 23 of his 29 shots so far this term, and Brentford’s leading scorer is the epitome of efficiency inside the danger zone.

He’s more of a goal poacher than somebody who manufactures chances for himself, but the 22-year-old has come of age and will be a target for Premier League sides hunting a goalscorer in January. For now, though, he’s integral to the Bees’ promotion hopes.

The standout star of this season’s Championship is West Brom’s Barnes. On loan from Leicester, the 20-year-old attacking midfielder has set the division alight with a string of mesmeric individual displays.

He began the season as a left-winger, but a switch to 3-4-1-2 means he’s found a new niche in the coveted No.10 role – a position Barnes has taken by storm.

Blessed with speed and natural dribbling prowess, Barnes ran from inside his own half to score a sublime goal against Sheffield Wednesday; this, on the back of netting wonderful strikes against Norwich, Bolton and Bristol City too.

The England U21 international has been a constant menace on the counter-attack, and so far looked a class apart at The Hawthorns. Whispers suggest Claude Puel wants to recall him in January, though, so Baggies fans should enjoy his talents while they can.