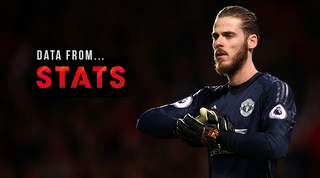 *Note: all data courtesy of STATS; goalkeepers ranked on saves per goals conceded

Hart was dropped by David Moyes earlier in the season, and the statistics back up the impression that the Manchester City loanee was underperforming. Hart made only 1.27 saves per goal conceded in his 14 appearances between August and November, which helps to justify why his World Cup place is in serious jeopardy.

Mignolet is another goalkeeper who has grown accustomed to the substitutes' bench after beginning the campaign as Liverpool's No.1. A rate of 1.46 saves per goal persuaded Jurgen Klopp to ditch the Belgian in favour of Loris Karius, who's kept only two fewer clean sheets than Mignolet in nine fewer outings.

Gomes is a popular figure at Vicarage Road thanks to his exploits between the Watford sticks since 2014, although he's not returned to the starting XI since recovering from a back injury in February. The Brazilian has only made 1.51 saves per goal conceded this term, and he averages 1.72 goals conceded per 90 minutes.

McCarthy usurped Fraser Forster in the Southampton pecking order at the end of December, but a shut-out against Stoke last Saturday was only his second clean sheet in nine games. Just as Southampton are one place above the bottom three in the Premier League standings, their first-choice goalkeeper is fourth-bottom of this ranking.

Signed on a season-long loan from Mainz last summer, Lossl has played every minute of every Premier League game for Huddersfield this season. The Denmark international has kept seven clean sheets and made a total of 80 saves, but a rate of 1.6 stops per goal conceded is one of the lowest in the top tier.

Cech took the unfamiliar step of publicly apologising for two costly errors after Arsenal's 2-1 defeat by Brighton last time out, and there have been signs of decline from the ex-Chelsea custodian throughout this season. A record of just 1.63 saves per goal conceded is certainly less than you'd expect from a goalkeeper who was previously one of the best in the Premier League.

West Brom have endured a miserable campaign and look doomed to relegation after winning just three of their first 29 matches. The Baggies' defensive record is 'only' the seventh worst in the division, with Foster - who's only missed one game - keeping seven clean sheets and making 1.81 saves per goal conceded.

Bournemouth paid £10m to sign Begovic from Chelsea last summer, and the Bosnian hasn't missed a single minute in the Premier League since then. The 30-year-old shot-stopper has been kept busy, making a total of 81 saves at an average of 1.84 per goal conceded.

Watford signed Karnezis on a season-long loan last summer. The Greek got over a disastrous debut off the bench against Everton in November by displacing Heurelho Gomes in late January; overall he's made 15 saves and conceded eight goals in 571 minutes of action.

Pickford was arguably at fault for Burnley's equalising goal last weekend, but he's been afforded little protection by Everton's porous backline for much of the season. Only two goalkeepers have made more saves than the ex-Sunderland glovesman (97), whose save percentage of 66.4 is just below the Premier League average.

Crystal Palace failed to secure a replacement for the departing Steve Mandanda last summer and therefore began the season with Hennessey in goal. The Welshman hasn't always convinced at Selhurst Park, but a rate of 2.03 saves per goal conceded means he ranks higher than 10 of his top-flight rivals.

Leicester's player of the year for 2016/17 hasn't been at his best in recent weeks, with the Danish custodian failing to keep a clean sheet in his last five appearances. He has shut out opposition strikers in seven games this term, though, and made 2.05 stops per goal conceded.

Club legend Speroni returned to Premier League action earlier this campaign, playing 11 games between mid-October and the end of December. The long-serving Crystal Palace custodian only kept his sheets clean twice in that time, but his record of 2.07 saves per goal conceded is marginally better than team-mate Wayne Hennessey's.

David Moyes made a big call when he dropped England international Joe Hart for Adrian shortly after taking charge at West Ham, but his decision has been vindicated by the Spaniard's subsequent showings. The former Real Betis No.1 has stopped 2.08 shots for every goal he's let in this term, as well as making a total of 50 saves.

Rafael Benitez has used three different goalkeepers in 2017/18, with Elliot handed the gloves for 16 of Newcastle's 29 Premier League outings. The Republic of Ireland international has made 44 saves, conceded 21 goals and kept three clean sheets in his 1,440 minutes on the pitch.

With Joe Hart struggling for game time at West Ham, Butland has emerged as a strong contender to start in goal for England at this summer's World Cup. The Stoke shot-stopper has, for the most part, performed well in a struggling side this season, making 99 saves - only one top-flight goalkeeper has denied opponents more often - at a rate of 2.11 per goal conceded.

Courtois has looked a little shaky during Chelsea's recent downturn in form, but he remains one of the best goalkeepers in the Premier League. The Belgian has made 55 saves and conceded 26 goals in 2017/18, and his record of 13 clean sheets is bettered by only one of his peers.

Karius hasn't completely dispelled the doubts over his suitability to the No.1 role at Anfield this season, but he's certainly made steps in the right direction. The German has been much improved in his 10 Premier League appearances in 2017/18, keeping five clean sheets and making an average of 2.13 saves per goal conceded.

Southampton boss Mauricio Pellegrino dropped Forster after a perceived run of poor form in December, but the statistics suggest the ex-Celtic man hasn't performed that badly this campaign. Only six goalkeepers boast a better record than Forster's 2.23 saves per goal conceded, while his average of 3.35 stops per 90 minutes is higher than most of the division's custodians.

Darlow has been on the bench for more games than he’s started in the Premier League this season, but his 10 appearances between the Newcastle posts have featured two clean sheets and 34 saves. The Magpies shot-stopper let in 15 goals in those outings, which means he averages 2.27 interventions per strike conceded.

Ederson’s composure in possession and long-range passing have caught the eye this season, but he’s also excelled when it comes to more conventional goalkeeping duties. The Brazilian has conceded only 20 goals and made 2.3 saves for every strike that’s beaten him, while 13 clean sheets is the joint-second highest in the division.

Tottenham have found form at just the right time in the Premier League, and Lloris’s four clean sheets in the last five encounters have helped Mauricio Pochettino’s men climb into the top four. The Frenchman has kept opponents out in 13 matches this season, while averaging 2.3 saves per goal conceded.

Brighton have significantly boosted their survival chances in recent weeks, although it’s now eight games without a defensive shut-out for Chris Hughton’s men. The ever-present Ryan has kept that exact number of clean sheets this season, though, while also averaging 2.34 saves for every goal conceded.

Swansea looked doomed before Carlos Carvalhal took the reins in late December, but some fantastic results since then have lifted the Welsh outfit out of the relegation zone. If they do manage to stay up, the Swans will also owe a debt of gratitude to Fabianski: the ex-Arsenal man has made a league-high 101 saves in 2017/18, averaging 2.4 per goal conceded.

Pope began the campaign as back-up to Tom Heaton and was presumably targeting a handful of appearances in the cup competitions. Instead, the former Charlton goalkeeper has admirably stepped up in his team-mate’s injury-enforced absence, keeping nine clean sheets in 26 games and making 3.86 saves for every goal conceded.

De Gea has a fourth player-of-the-year award in his sights at Old Trafford having scooped the gong in 2013/14, 2014/15 and 2015/16. The Spaniard has once again been sensational between the sticks for Manchester United, making 95 stops, recording a save percentage of 81.2 and keeping a Premier League-high 15 clean sheets.

In context, he's made more saves than lower-table regulars Mat Ryan (89), Jonas Lossl (80), Ben Foster (76) and Fraser Forster (67); made only four fewer stops than a goalkeeper whose defence has been breached 54 times this season (Jack Butland); and roughly twice as many as top-four rivals Ederson (46) and Hugo Lloris (53). Despite all of that, Manchester United sit second in the Premier League having conceded fewer goals than anyone but Manchester City.

There are goalkeepers who dominate their box more readily and those who are better with their feet, but De Gea is the master shot-stopper – and that, after all, is the most important quality of anyone who dons the gloves.