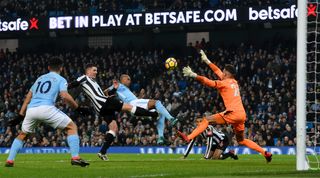 Not quite Manchester City at their best, but still a return to winning ways - and still an awful lot of possession. Sergio Aguero gave the home team the lead, turning in a Kevin de Bruyne cross just after the half-hour mark. Fifteen minutes into the second half, Raheem Sterling was felled in the penalty box by Javier Manquillo and, again, Aguero made no mistake. It wasn't quite as easy as it might have been, especially not after Jacob Murphy pulled a goal back with his first for Newcastle. Given Aguero's fine history against this side, though, it was with some inevitability that he completed his hat-trick to seal the points. City run out winners, but Newcastle were not without merit here.

Willian has been directly involved in eight goals in his last five Premier League starts for Chelsea (3 goals, 5 assists).

A quick double punch made this a very easy day for Chelsea: slick, well crafted moves finished by, first, Hazard and then Willian had them two up within six minutes. Cruising. Brighton did have chances, but it did always feel as if Chelsea were holding them at arm's length - and when Hazard raced up the pitch, sat a few defenders down and cut a third goal in beyond Mat Ryan, the scoreline more accurately reflected their performance. Victor Moses added a fourth late on, which was a little harsh on Brighton, after a fine ball from Charly Musonda.

Arsenal began with as good a thirteen minutes as they've had all season, finding themselves three-nil up and with the points safe in less than fifteen minutes. Crystal Palace, however, were an absolute shambles and as poor as they've been since Roy Hodgson arrived. Alexandre Lacazette added a fourth goal after 22 minutes, finishing a flowing team move. Palace did pull a goal back late on through Luka Milivojevic, but this was largely a shambles.

As could have been predicted, Manchester United spent the first-half trying to probe a tough Burnley defence. Sean Dyche has not enjoyed watching his side's standards slip over the past month and this was their response. From looking comfortable, though, the home resistance quickly fell away: inside ten second-half minutes, Anthony Martial had put United into the lead, capitalising off excellent build-up play from Romelu Lukaku.

Albion got off to a fast start: Grzegorz Krychowiak produced the best moment of his loan spell to date, playing in Jay Rodriguez beyond the Everton defence and into position to score the opening goal. Good news for Everton, though: in the first-half, Jonjoe Kenny recorded their first shot on-target since Idrissa Gueye's goal against Bournemouth. Oumar Niasse would record another shot on-target - greedy - when he equalised following Theo Walcott's knock down. Unfortunately, the second-half was overshadowed by a nasty injury to James McCarthy who, according to initial reports, suffered a double fracture of his leg. Points shared at Goodison Park.

Since the start of 2014-15, Jamie Vardy has won more penalties in the Premier League than any other player (13).

A positive start for Watford was ruined just before half-time, when Molla Wague brought Jamie Vardy down in the box, with Vardy converting the resulting penalty. Harsh on the visitors, who had had the ball in the net just moments before, only for Troy Deeney to be ruled offside. Watford showed signs of improvement here, certainly, but were eventually killed off on the counter-attack, Riyad Mahrez scoring Leicester's second in stoppage time.

Catch the highlights of this one later, because Xherdan Shaqiri's goal - although disallowed - was wonderful. Anyway, Joe Allen gave Stoke the lead (for real) shortly after, finishing off a good move involving Charlie Adam and Eric Choupo-Moting. Mame Diouf would secure the points for Paul Lambert fifteen minutes later, scoring off the bottom of the post after a Shaqiri lay-off.

A first half of few chances, but a second full of incident. Ryan Fraser put Bournemouth into the lead, converting Junior Stanislas's pass, but Eddie Howe will have been disappointed in how long that advantage lasted - Javier Hernandez prodded home from short range just seconds later.