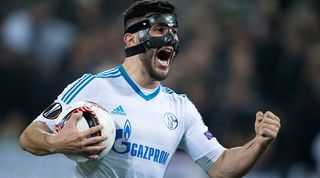 Arsenalhave announced a deal to sign Schalke left-back Sead Kolasinac on a free transfer, beating numerous suitors who wanted to see the Germany-born Bosnian international in their ranks. It's quite obvious why he's attracted such attention. Schalke's season might have been disappointing, but Kolasinac enjoyed the best months of his career so far.

Not only did the 23-year-old provide three goals and nine assists in all competitions, but his defensive contribution was consistent and he's widely considered one of the best players in in his position in the Bundesliga. With Kolasinac's contract running out in June, he naturally became a sought-after prodigy.

Having joined the Gelsenkirchen club back in 2011 after somewhat problematic spells at Hoffenheim and Stuttgart had earned him a negative reputation, Kolasinac soon established himself as a leader in the youth team, who he captained to the title alongside the more promising talent Max Meyer.

He played superbly in the final against Bayern Munich, represented Germany at Under-19 level, and was eventually promoted to Schalke's senior squad in 2013. Making his full debut in the starting line-up against Bayern of all teams was an exciting occasion, even though it ended in a 4-0 defeat.

And yet, there were significant problems. For starters, Kolasinac was a bit too versatile for his own good. He started as a striker at Karlsruhe academy in his young days, but gradually understood that he's mostly a destroyer.

With Schalke's reserves, he at times played in defensive midfield, stating that the volatile German-American star Jermaine Jones was his role model because he always made his voice heard. At the same time, Kolasinac admitted that he considered himself best suited to starring in central defence, but was mainly used at left-back in the first team.

The impression was decent initially, but his progress was cruelly halted when Kolasinac tore knee ligaments in the first game of the 2014/15 season, which led to him missing most of the campaign. Upon returning to fitness, the defender failed to establish himself a regular starter and was frequently criticised for poor attacking contribution.

Reluctant to cross the halfway line, Kolasinac often saw the more technically skilled Dennis Aogo preferred to him. That's one of the reasons why Schalke failed to renew Kolasinac's contract in time – he simply wasn't convincing enough, and a new deal wasn't considered top priority by the management.

Everything changed completely last summer, however, when Schalke signed Chelsea misfit Baba Rahman on loan. The Ghanaian was supposed to be the first-choice left-back, but the competition suddently helped Kolasinac to find new motivation and take his game to another level entirely. He tuned in a magnificent performance in the 4-0 thrashing of Borussia Monchengladbach and never looked back.

Remarkably, the Bosnian managed to improve his attacking play beyond recognition. Cautious in previous seasons when Schalke played with flat four at the back, he flourished when the coach Marcus Weinzierl decided to switch to a 3-5-2 formation.

Kolasinac became a wing-back who was responsible for covering the whole flank, and the new role suited him perfectly. Suddenly, his crosses became more dangerous, and his attitude is now much more adventurous. The number of goals scored and assists provided in 2016/17 is much higher than in all his previous seasons combined.

Kolasinac's sensational progress took Schalke by surprise, and they are now regretting not extending the contract – but it's now too late for a team who will be without European football next season.

Kolasinac is, first and foremost, a warrior. He describes himself as a "nasty" defender, and stated that he wouldn't like to play against himself if he were a striker. His stamina is exceptional, he's very strong physically, good in the air and quick on the ground, and able to run at least a kilometre at full speed in every match. The Bosnian is very durable and not afraid of pain; he even played with a broken nose last season. Schalke fans love his never-say-die attitude, and he has the potential to develop into a true leader.

In addition, Kolasinac proved himself as a dangerous attacker on the wing. He's not shy to shoot from distance and is always willing to offer himself on the overlap, while his crosses have become remarkably good. Taking his success in recent months into account, it must be said that the 3-5-2 system suits him best.

Kolasinac isn't the most technically gifted player, to put it mildly. He's poor at dribbling, his short passing leaves a lot to be desired and he only uses his weaker right foot for running.

Priding himself as a tough man, he can be reckless, and his tackles are at times too dangerous. It's a minor miracle that he hasn't received a single red card in his career so far - he definitely deserved one in a derby clash with Borussia Dortmund last season.

"Sead embodies Schalke. The boy runs up and down the flank, and now can even score goals," said Schalke sporting director Christian Heidel.

Vinícius Junior: Who the heck is the 16-year-old Real Madrid will pay €45m for?

Kolasinac was unfortunate to score the fastest ever own goal in World Cup history, after just three minutes against Argentina in 2014. Incidentally, that happened in his first competitive game for Bosnia and Herzegovina, after he decided to represent to country of his parents.

Kolasinac is a very good friend of former Schalke starlet Leroy Sane and, having witnessed the winger's steady progress at Manchester City looks likely to follow him to the Premier League. Arsenal seem to have won the battle for his services, but his talents might actually be better suited to Antonio Conte's tactics at Chelsea.

The rising star will certainly feel at home with the pace and physical aspects of the game in England, but he might lack the necessary finesse to fully convince for the Gunners.