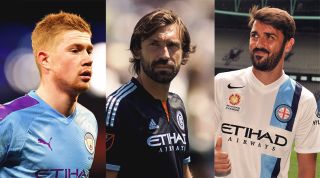 The odds may just have shot up on Anderlecht coach, Vincent Kompany, taking charge of lower league Lommel SK, in his native Belgium.

Lommel have had a tumultuous history of bankruptcy, mergers and the heady days of a couple of Intertoto Cup runs. With Belgian football midway through a golden generation though, taking a stake in a club there makes sense: it could be a goldmine to find the next Eden Hazard - or Thorgan, if you’re looking to make a quick profit.

But Belgium isn’t the only market that Manchester City’s owners are looking to exploit. Lommel is just the latest club added to the global City Football Group.

In 2012, Manchester City had their first breakthrough into their quest of becoming one of Europe’s elite - and not just with Sergio Aguero’s last-gasp winner to seal a first title in 44 years.

That year, the club appointed former Barcelona vice-president Ferran Soriano as their new CEO, and former Barca director of football Txiki Begiristain in the same role at Eastlands; it was a set-up that was, in part, designed to tempt Pep Guardiola to the club one day. The story goes that Soriano continued discussions with MLS chief Don Garber that he’d been having in his Barcelona days, and just a year later, the latest US soccer franchise was announced as being New York City FC.

Former City star and US international Claudio Reyna became the director of football at NYCFC; another City alumni Patrick Vieira later took the reins of management, hinting that perhaps City were lining him up for a Premier League management role later on. Perhaps the biggest on-field connection that fans will have noticed, however, came when out-of-contract Frank Lampard left Chelsea for the MLS, before being loaned back to City for a season.

20% of NYCFC is owned by Yankee Global Enterprises, the company that also owns the New York Yankees baseball team.

A-League side Melbourne Heart was announced as the next addition of City’s owners in January 2014, triggering the formation of holding company City Football Group. The side’s Heart suffix - which had originally been voted for by the public - was controversially changed to City as to align with the group; likewise, the team’s Sunderland-style striped kit became the alternate strip.

Melbourne City’s first significant export to Manchester was Aaron Mooy, who Man City made £8m from when he eventually moved to Huddersfield Town, despite him never playing a minute for them. Daniel Arzani became another highly-rated talent to be snapped up by Man City, only for him to be loaned out to Celtic on arrival in 2018, and again somewhat controversially, NYCFC’s David Villa was sent Down Under to collect match fitness.

Other significant European stars who wound up their careers in Eastern Australia with Melbourne City include Damien Duff, Harry Kewell, Thomas Sorensen and Tim Cahill. All of these players were under the watchful eye of the group’s directors, who are on constant lookout for potential coaching talent.

In May 2014, the City Football Group expanded its reach into Asia with a 20% stake in J-League side Yokohama F. Marinos. The deal became the first minority club stake from the group, with car giant Nissan owning the other 80% of the project.

So far, the Yokohama side haven’t produced a player for the group’s Premier League ventures, though Manchester City played their sister club last summer. City visited the Far East for a preseason tour last season, finishing with a 3-1 victory over the Marinos. Yokohama F. Marinos are doing alright on the pitch themselves too, though: they won the league last season for the first time in 15 years, having narrowly missed out on relegation the season before.

But the Japanese deal was about more than just football. Nissan became CFG’s first “multi-club” partner; the car company is still the automotive partner of Man City, and current manager Pep Guardiola is an official Nissan Ambassador. You may have seen Yaya Toure and Sergio Aguero in Nissan ads, by the way.

TAKEOVERS What next for Newcastle United? 5 things that will happen once the takeover is complete

In 2007, Uruguayan businessman Raul Aquino Reynoso founded his own team, Club Atletico Torque, starting at the very base of the country’s footballing pyramid. Just ten years later, Torque became the next part of the City Football Group jigsaw, complete with a name change, slick new badge and club vision.

Torque was announced alongside a partnership with Atletico Venezuela, a side in the Primera Division of Venezuela, though this deal was slightly different. CFG declared that rather than purchasing the club outright, their partnership would see “Atletico working with and benefitting from CFG’s scouts and scouting methodology”, adding that the deal included “coaching support to Atletico during a number of agreed visits to Manchester,” rather like a sixth form exchange program.

The presence of two CFG representative clubs in South America not only means that City now have access to more scouting data in the region than most clubs, but they have two clubs in which to avoid third-party ownerships of players. Handy, for if they find the next Carlos Tevez.

In 2015, Spanish promotion hopefuls Girona were facing a battle to keep defender Florian Lejeune, who’s now at Newcastle United. The Frenchman was attracting a number of suitors looking for his signature, but luckily, Manchester City stepped in to help, signing Lejeune and loaning him back to the Spanish club.

At this point, City had no stake in Girona. They had no stake when they loaned them youth starlets Chidiebere Nwakali and Pablo Maffeo, or even Ruben Sobrino, a player Girona desperately coveted but couldn’t afford. City’s interest was not so much with the side itself however than the ownership.

In 2015, the Girona Football Group, led by Pere Guardiola - Pep’s younger brother - had purchased a 44.3% stake in the Catalonian side. CFG sought to build relations with Pere, looking to gain an advantage over European giants when the then-Bayern Munich boss Pep sought to end his tenure in Bavaria.

It worked: in 2016, Pep joined City and the following year, CFG were announced as fellow 44.3% stakeholders in Girona.

In 2015, Chinese president Xi Jinping visited Manchester, taking selfies with then-prime minister David Cameron (remember him?) and City hero Sergio Aguero on a trip to the Eastlands training facility. Rumours began circulating about Xi - who has played a huge role in China’s footballing revolution - having something to do with City Football Group acquiring a Chinese side.

A much bigger deal was to be made. Just months later, CFG sold 13% of its company to Chinese companies, China Media Capital and CITIC Capital, for $400m, valuing CFG at $3bn and prompting CMC chairman Li Ruigang - who’s often dubbed “the Rupert Murdoch of China” - to join the CFG board.

In February 2019, CFG purchased Sichuan Jiuniu, a third tier club in China. Ferran Soriano has described the Chinese market as hugely important - so whether CSG will look to use Sichuan Jiuniu to bring the best Chinese talent to Europe, or just expand their commercial programs, remains to be seen.

In November 2019, Indian Super League side Mumbai City became the latest acquisition of the City Football Group. Whether coincidental or not, the 2014-founded club had previously been managed by former City stars Peter Reid and Nicolas Anelka.

Mumbai City have yet to see too much change to their club since the takeover, aside from Etihad now sponsoring the team and Puma making their kits - just like Man City.

Rumours of more City Football Group acquisitions - including Saint-Etienne in France, Boavista in Portugal and even a potential Malaysian Super League side - continue to circulate, however after the Sichuan Jiuniu deal, Ferran Soriano told a press conference that the company were not considering any further acquisitions of European clubs.

For a while, this appeared to be true; Soriano had mentioned that CSG’s focus was now on long-term investment in countries where football was set to surge in popularity, such as in India, as opposed to established markets. Sure enough, Mumbai City followed.

The recent purchase of Lommel, therefore, seems like a buck of CSG’s trend. Will Kompany take charge then? Is a name change to Lommel City imminent? Perhaps Kevin de Bruyne will wind up his career at the club before completing his coaching badges under the guidance of CSG directors. Whatever happens, it’s unlikely that the Belgian side will be the last club added to the group’s collection.