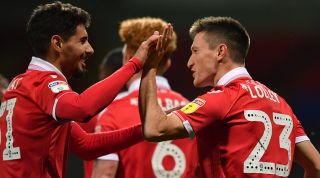 You know what you’re getting with Tony Pulis. Middlesbrough have a comically miserly defence and shot-shy attack. Pulis has entered hyper-Pulis mode. Their league matches this season have averaged just 1.92 goals per game.

But Middlesbrough aren’t quite so defensively solid as you might think. Twelve Championship clubs allow fewer shots per game on their own goal, and four cede fewer shots on target. The key to them conceding so few goals has been the majestic displays of Randolph, now 31 and in the best form of his career. It’s no wonder he is cemented as Ireland's No.1.

James was slightly crowbarred into the official EFL Team of the Year, picked at centre-back despite playing 30 of his 38 league games at right-back and the other eight in defensive midfield. None of that tactical silliness here.

Norwich’s Max Aarons can consider himself unfortunate, but James has excelled in a struggling Wigan side that are still far from securing their place in next season’s Championship. You can make your own joke about James making it at his parent club Chelsea, given their tendency to farm players out on loan before selling them permanently, but that only makes his displays at Wigan more important. At 19, he is setting up the rest of his long career.

This is slightly controversial given that Sheffield United play a 3-4-1-2 formation with wing-backs rather than regulation full-backs, but Stevens still makes the grade. There are more talented players than him in the Championship, but few have improved quite so markedly over the last two seasons. He has become established as Ireland’s first-choice left-back.

Stevens’ role at Bramall Lane is an interesting one. As a wing-back he is expected to push on and provide a significant number of crosses from open play; he’s managed six assists already this season. But if you thought that might impact upon his defending, think on – only six players have made more tackles. He is the all-action left sider that Wilder’s system needs to flourish.

Leeds supporters might idolise Pontus Jansson, but it’s his central defensive partner and captain who makes this team. Rather than detail his impact on their promotion campaign, sit back and take in this gushing praise from Marcelo Bielsa: "I can tell you what I am impressed about. You can't find a better professional than him. He feels love for his profession apart from the fact it is his job. He is generous and prioritises the needs of his team-mates before his own needs."

And there describes the perfect club captain, who somehow still hasn’t yet been capped by Scotland at senior level.

Only Sheffield United and Middlesbrough have conceded fewer Championship goals than Bristol City this season, and Webster has been the best performer in their backline. There were eyebrows raised when Lee Johnson paid a fee of £3.5m that could reportedly rise as high as £8m with add-ons, but Webster has already justified that hype. At 24, there is surely still room for more improvement and it would be no surprise if there was Premier League interest this summer.

Webster and his manager would insist that Bristol City’s defensive success is founded upon his partnership with Tomas Kalas and both were under consideration, but Webster’s composure with ball at feet means he gets the nod. He has everything the modern manager wants in a centre-back.

NEXT PAGE… The Championship’s top sharp-shooters

Pep Guardiola’s critics unfairly label him as purely a chequebook manager, deliberately ignoring the improvement and development in the players he inherited. On a less financially obscene level, the same could be said of Bielsa. Yes, Leeds spent £6m on Patrick Bamford, £3m on Barry Douglas, brought in four players on loan from Manchester City and Chelsea, and signed a goalkeeper from Real Madrid. But look outside of that group to see the real Bielsa effect.

Take Phillips, who became a regular in Leeds' starting XI in 2016/17 but was in danger of plateauing under a succession of short-term managers. Phillips revealed as early as July that Bielsa had been training him in a deep-lying playmaker role, and his new manager has transformed his game. He drops into defence as needed, surges forward when required and is the ringleader in hounding down opposition players when Bielsa demands they press.

Norwood may well lay claim to be the best player in the Championship this season, despite being left off the EFL’s nominations for that award. He may not have ever appeared in the Premier League for Manchester United before being released but, seven years later, now may well get that chance.

Norwood has completed more passes than any other Championship player, but it’s both the range of that passing and his consistency in dictating the tempo of Sheffield United’s play that is more important than the volume. Fulham chose not to make his loan deal permanent last summer and instead spent £30m on André-Frank Zambo Anguissa. Like most things they did before the start of last season, the decision looks nonsensical in hindsight.

Necessity is the mother of invention. With Norwich’s finances looking unpleasant, the club realised that they needed to sell their highest value assets and use extensive scouting networks to search for bargains and provide Daniel Farke with a squad that could hold its own in the Championship. If the club never expected that to end in automatic promotion challenge, it's just reward for their groundwork.

Buendia is the perfect example of their recruitment in action. He was loaned out in 2017/18 by Getafe, who accepted a bid of less than £1.5m for the right-winger, who replaced the departing Josh Murphy (sold for £11m). The Argentine, still only 22, has scored seven league goals and assisted a further nine to take Norwich to the verge of the Premier League.

Nottingham Forest’s promotion campaign may have faltered amid inconsistent performances, disappointing away form and another mid-season managerial change, but Lolley is absolved of all blame. Forest have recruited an alarmingly high number of players over the last few seasons, including £15m on Portuguese attacking midfielder Joao Carvalho, but none have provided value for money like the £500,000 they paid Huddersfield for Lolley.

If his versatility to play anywhere across a midfield is damn useful, it's Lolley’s creativity and eye for a spectacular goal that stands out most. Eight goals and nine assists include four of the latter in 90 mad minutes at Villa Park in November, against the club Lolley supported as a boy.

The presumption is that scoring goals in the Scottish Premiership is easier than the Championship. Kris Boyd topped the charts last season, having scored 12 times in 37 matches in his last season in England’s second tier.

But where Gary Hooper failed, Pukki has succeeded spectacularly. The Finland international scored nine times in 37 matches in Scotland having signed a four-year deal at Celtic, and was never prolific at Brondby thereafter. But at Carrow Road this season, his goals and creativity - this is no one-dimensional striker - have fuelled Norwich’s push for the Premier League. To average a goal or assist every 94 minutes in your first season in a new country is frankly astonishing.

The surprise story of the season, bar none. Sharp has always been a very capable striker, but his best goalscoring seasons have always come at League One level. In his previous nine seasons in the second tier, Sharp had only once scored at least 15 league goals.

But at the age of 32, he has produced the best form of his career. We have waited and waited for the goalscoring run to dry up, but to no avail. If Chris Wilder deserves his prize as Championship Manager of the Year for engineering a remarkable promotion bid, Sharp is Wilder’s poster boy on the pitch. Hard work, determination and professionalism can take talent further than we assumed was possible.

QUIZ! Can you name the 28 players with 100+ Premier League goals?