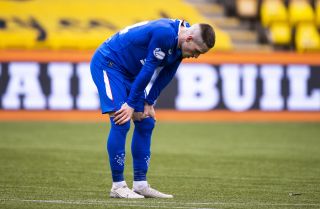 Rangers missed the chance to move clear at the top of the table after they were held to a goalless draw by Livingston.

Here PA takes a look at five things we learned from the latest round of Scottish Premiership action.

Steven Gerrard was looking to see his Rangers side open up a two-point lead over Hibernian with a seventh straight victory over Livi. But, in a repeat of last season’s struggles, the Light Blues lacked the imagination to break down Gary Holt’s side. Gerrard even threw on new signings Kemar Roofe and Cedric Itten for the final half-hour but that made little difference as the stubborn hosts refused to budge.

St Mirren signed the Englishman from Rangers as manager Jim Goodwin moved to replace the highly-rated Vaclav Hladky. Alnwick has already vindicated that faith and a series of saves helped the Buddies to a 1-0 win over Hamilton on Saturday, after which Goodwin called him the form keeper in the league.

Motherwell have rediscovered their form

Stephen Robinson’s side are still seeking their first win but they were the better team in a goalless draw at Easter Road that ended Hibernian’s perfect start to the season. Robinson now has a preferred starting XI to build some momentum.

Dundee United have confidence behind them

🗣 "We are Dundee United. I see us as a club that should be coming here and representing the Club properly."— Dundee United FC (@dundeeunitedfc) August 15, 2020

United have been feeling their way into the top flight after a four-year absence but a second away win prompted manager Micky Mellon to remind his players of the club’s stature. After beating Ross County 2-1, Mellon said: “We are Dundee United. I want everyone to acknowledge that. I see us as a club that should be coming to these places and representing the club properly.”

The forward was sent off on the opening day after a string of first-half fouls against Dundee United. His colleagues dug him out of a hole by securing a point at Tannadice and O’Halloran returned with a bang with a stoppage-time winner at Kilmarnock as Saints came from behind to triumph 2-1.