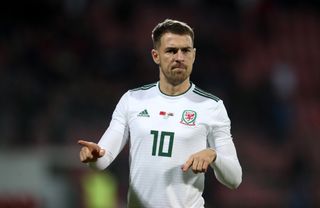 Aaron Ramsey will miss Wales’ Wembley friendly with England after his club Juventus put their players into a bio-secure ‘bubble’.

Two non-playing staff members at the Turin club tested positive for cornavirus and the whole team have gone into “fiduciary isolation”, which Juventus said means the players can “carry out regular training and match activities, but will not be allowed contact with (anyone) outside the group”.

Wales hope that Ramsey will be available for the following Nations League games away to the Republic of Ireland and Bulgaria.

“Aaron Ramsey is currently unable to join the squad until after the England match,” the Football Association of Wales posted on their Twitter account.

Ramsey’s absence is a further blow to manager Ryan Giggs, who has become used to being without the 29-year-old former Arsenal playmaker.

A succession of injuries has meant that Ramsey has only started once for Wales since the start of 2019, the decisive Euro 2020 qualifier when he scored twice in a 2-0 victory over Hungary.

Giggs has also lost West Brom striker Hal Robson-Kanu to injury for the October triple-header and was already without captain Gareth Bale.

Bale was allowed to train at Tottenham during the international break as he recovers from a knee injury picked up on international duty last month.