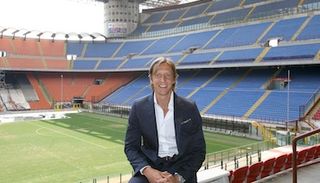 "This is my last press conference as a Milan player and I want to thank you all for 18 fantastic years that I won't ever forget," the 36-year-old midfielder said after the Serie A club decided not to renew his contract.

"I had to give myself a couple of days to work off a little of the inevitable sadness but life goes on. I still feel like a footballer and I will carry on playing."

"I'm very sad that I have to say goodbye to Ambro, it's a decision that has involved me emotionally," said Milan vice-president Adriano Galliani.

"He's upset as well but in the end his age was a more important factor than more emotive reasons. He was a great player for Milan."

The former Italy international has been strongly linked with Fiorentina, whom Milan pipped to the third Champions League spot on a dramatic final day of last season.

Ambrosini added to the speculation on Friday when he said he would be interested in talking to the Tuscan club about a move.

"Fiorentina are a great club, a great team with a great manager who have a very interesting ongoing project, and if they were to approach me I would listen to what they had to say."