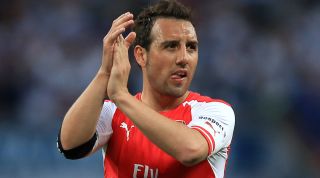 Cazorla played at Arsenal for six years, having joined from Malaga in 2012, winning two FA Cups during that time.

The Spaniard was a fan favourite amongst the Emirates Stadium faithful and his role as a diminutive playmaker play earned him the nickname 'Little Magician'.

Cazorla was hit by an injury late on in his Arsenal career, which escalated to a career-threatening situation.

After an operation on his ankle, the wound failed to scar and it subsequently got infected - to the point of bacteria infecting the very bone itself.

But it was the tendon that proved the biggest problem, as the infection had eaten away at up to ten centimetres of muscle.

"I’d been lucky, they said, it could have been more," Cazorla told The Guardian in 2018.

"When he had to rebuild the tendon, he realised how bad a condition the bone was in. He could put his finger in it. It was like Plasticine. That’s even more dangerous."

During his time under the knife, Cazorla had moved back to Spain - to Villarreal where he started his career.

The 35-year-old has expressed how sad he was to have not had a chance to properly say goodbye to Arsenal.

"I don't know if it's possible or not, but I want to play one more game for Arsenal before I retire. It was a deep regret that I could never have a proper goodbye," he told Goal.

Cazorla may well have the chance to play for Arsenal again following comments by the club's head of football Raul Sanllehi.

As per football.london, Sanllehi told fans at the fans forum that he is close to Cazorla's agent and that they are talking about a possible return.

He is believed to have said that they will know more as the season's closing schedule becomes more clear.