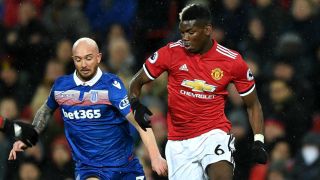 Paul Pogba joined Kevin De Bruyne and Leroy Sane on nine assists for the Premier League season on Monday, the Manchester United midfielder demonstrating his importance despite being hampered by injury and suspension.

Pogba set up Antonio Valencia and Anthony Martial for United's two first-half goals in a 3-0 win at home to Stoke City, and in doing so the Frenchman became one of the three most productive players in the league in 2017-18.

That is despite the former Juventus star having only played in 13 league matches due to a hamstring problem that sidelined him for seven games and the three-match ban he incurred after being sent off against Arsenal.

De Bruyne has started all 23 of City's Premier League matches this term, while Sane has made 21 league appearances for Pep Guardiola's team, 16 of them starts, to reach their nine assists apiece.