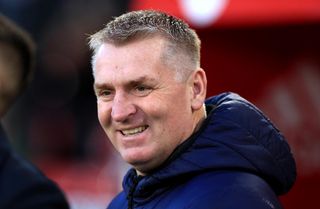 Aston Villa boss Dean Smith believes Manchester United’s victory over Manchester City in the Carabao Cup on Wednesday night has offered up hope of a surprise final win over Pep Guardiola’s side.

After beating United 3-1 in the first leg of the semi-final at Old Trafford, City were comfortably expected to clinch their final spot in front of their own fans at the Etihad Stadium.

Instead, they were made to sweat through to the final whistle after Nemanja Matic had pulled a goal back after 35 minutes, which proved to be the only breakthrough as City lost 1-0 on the night, but won through to their third successive final 3-2 on aggregate.

After seeing off Leicester, also via a 3-2 aggregate scoreline in their semi-final, Villa will go into the March 1 clash at Wembley as heavy underdogs, in particular after losing 3-0 at City and being hammered 6-1 at Villa Park earlier this month in the league.

Despite those results, Smith saw enough to convince him the final will not be another walkover for City.

Asked if facing City would be daunting, Smith said: “No, it’s a cup final.

“We certainly gave them a helping hand in a couple of results we’ve had against them so far. We need to learn from those errors, that’s for sure.

“Manchester United were expected to get beat last night but they went to City and beat them. It’s an opportunity for us to go and show what we’re all about in a major cup final.”

As to whether he has been given hope by United’s win, Smith replied: “Certainly. Man City played very well last night without getting a result. There’s no reason why we can’t do that.”

Smith is adamant the final will not serve as a distraction as Villa fight for their Premier League survival, starting with Saturday’s trip to relegation rivals Bournemouth.

“It won’t be because we’ve got three very big Premier League games leading up to that,” Smith said.

“The players know how important it is to be a Premier League club. There’s not one competition that’s more important. If you’ve got two children, you don’t choose which one you love the most.”

Smith has not ruled out making further signings or outgoings in the build up to the closure of the transfer window at 11pm on Friday night.

Despite the £8.5million capture of Mbwana Samatta, Smith is still in the market for another striker, while it is understood Fulham are chasing winger Jota, with centre-back James Chester heavily linked with a move to Stoke.

“To have that strength in depth to take us to May, I’d like to get another striker in,” confirmed Smith.

“In these last 48 hours, as everybody knows, things can change very quickly. I’d be foolish to rule anything out.”