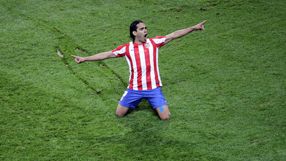 The Colombian international moved to the Vicente Calderon from Portuguese giants Porto last summer and impressed in his first season in Spain, playing an influential role in their journey to the Europa League title.

The 26-year-old's exploits in Madrid have not gone unrecognised and, having forged a reputation as one of Europe’s deadliest talisman, it is believed a host of clubs including Chelsea, Real Madrid and Barcelona are all fighting for his signature.

However, the La Liga club have distanced themselves from any reports suggesting they would consider parting company with their star striker, insisting Falcao's future remains in the red and white jersey.

"The club has very clear ideas on this," sporting director Jose Luis Caminero told As.

"Falcao will remain at Atletico Madrid and any talk of an exit is misplaced.

"The striker will remain with us next season and we are not considering any other possibility."