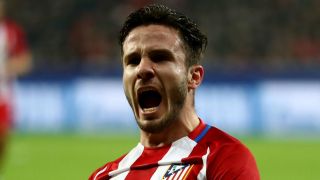 Saul Niguez all but secured a top-three LaLiga finish for Atletico Madrid in a 1-0 victory over Eibar on Saturday.

Following Tuesday's 3-0 defeat to Real Madrid in the first leg of their Champions League semi-final, focus switched back to ensuring automatic progression to next season's competition.

Leading fourth-placed Sevilla by two points heading into the penultimate league fixture to be staged at the Vicente Calderon, the hosts knew victory would leave Jorge Sampaoli's men praying for a miracle in their own bid to break into the top three following a 1-1 draw with Real Sociedad on Friday.

And, after a poor first-half showing in which they failed to register a shot on target, Atleti did eventually make the breakthrough to clinch all three points, Saul making up for an earlier miss with an accomplished finish after 69 minutes.

Atleti, who had Diego Godin sent off for two quickfire yellow cards in the closing stages, now sit five points clear of Sevilla with only two games remaining for both clubs.

Takashi Inui tested Jan Oblak with an early attempt on goal, but a lack of composure in the final third saw Eibar unable to capitalise on their possession in the opening minutes.

Atleti soon settled and Koke drilled the hosts' first effort just wide of the left-hand post, after the ball had ricocheted out to him off the legs of defender Florian Lejeune.

Penalty appeals fell on deaf ears when Ivan Ramis handled the ball six yards from goal on the half-hour mark – intentional or not, the ball was heading into a dangerous area until Ramis' intervention.

Ramis then slipped to allow Yannick Carrasco a free shot at goal, but the Belgian winger scooped his effort over the crossbar.

Saul then got in on the act by firing high and wide from a Thomas Partey pull-back, squandering another golden opportunity for Atleti to open the scoring.

Pedro Leon sent a left-footed effort whistling over early in the second half as Eibar started brightly, before Filipe Luis drew a save from Yoel Rodriguez with Atleti's first shot on target.

The former Chelsea full-back – already booked – was perhaps fortunate to stay on the pitch after catching Sergi Enrich with a high boot.

Antoine Griezmann shot straight at Yoel with an hour on the clock as Atleti's urgency to break the deadlock grew, and it was Saul who eventually netted the decisive goal.

A low cross from Godin on the left found Saul at the edge of the box, and the midfielder swept a wonderful effort into the bottom-left corner of the net.

Gonzalo Escalante's diving header was directed too close to Oblak as Eibar came close to an equaliser, but Atleti did enough to hold on to a victory that almost certainly spares them a European play-off, despite Godin's late dismissal.