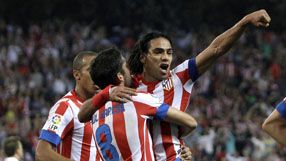 The prolific striker, who scored 36 goals in 50 matches last season, was a reported target for several top clubs this summer, including Chelsea and Manchester City.

But Atletico chief Cerezo believes the Colombia international can be relied upon to pledge his loyalty to the Europa League winners.

"If someone comes with the money and meets the clause, the player does not have to leave," he told Telemadrid.

"I don't think this is a matter for discussion, it is an issue that is there.

"But Falcao is a very serious person, he is a man who knows what contract he has, what situation he is in. He is in a team that wants him, he is delighted and above all he scores goals.

"He is very pleased and happy here, and until proven otherwise he will remain at Atletico Madrid."