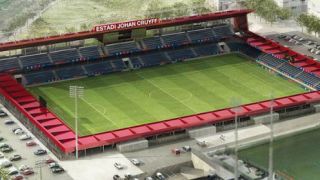 The first stone was laid at the site of Barcelona's Estadi Johan Cruyff on Thursday, as the club provided a first look at what the new stadium will look like.

Barca opted to the name the new stadium, which will play host to home games for Barcelona B and Barcelona Femeni, after former club great Cruyff, who died in March last year.

Cruyff joined Barca from Ajax in 1973 and, though he only won one LaLiga title and a sole Copa del Rey as a player at Camp Nou, he returned as a manager and delivered four league titles and the Catalans' first European Cup success, while also instituting the La Masia academy that has produced a host of incredible talents such as Xavi, Andres Iniesta and Lionel Messi.

From October 25, Ajax's Amsterdam ArenA will be known as Johan Cruijff ArenA and Barca provided a walkthrough of the other venue that will bear his name on Twitter.