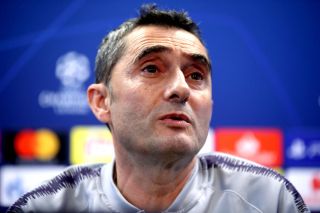 Barcelona manager Ernesto Valverde insists his team are not taking Celta Vigo lightly, despite his decision to rest eight senior players for Saturday’s away match.

Barca have already secured the LaLiga title and are on the brink of a place in the Champions League final as well as preparing for the final of the Copa del Rey.

However Philippe Coutinho, Ousmane Dembele, Arturo Vidal, Arthur and keeper Jasper Cillessen are among those expected to feature.

According to Marca, Valverde said: “We’re treating this game the same as the others.

“We’re going to try to get three points. We’ve put in lots of effort in the last three weeks and we’re going to make changes because it’s necessary to.

“It’s clear that we got a good result (in the 3-0 Champions League semi-final first-leg victory over Liverpool) but the tie isn’t over, far from it.

“We know this because we watch Liverpool regularly, we know what they’re capable of.

“Although there will be time to worry about (Liverpool), I know we can’t lose focus on the tie, but now we have to concentrate on (Celta).

“I could use (Cillessen) in these games. Each time there’s a possibility, he’s played a match, like he didn’t last year. We’re happy with him, he’s a great goalkeeper and I know that the goalkeeper position is very special.”

Valverde also reminded his team that their past three visits to Celta have resulted in two defeats and a draw, adding: “We lost here last year.

“We made changes in the league and cup, I remember. It’s the first opportunity to change the dynamic.”

Celta manager Fran Escriba has taken encouragement from Barca’s team selection, telling his club’s official website: “We are aware that Rakitic and Busquets are not coming due to a suspension. It’s a good opportunity for us because we believe we can beat any team.”