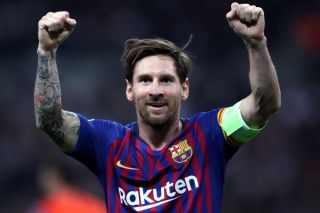 Barcelona midfielder Ivan Rakitic admits the players are inspired to follow wherever Lionel Messi leads as he is “the best player in history”.

Coach Ernesto Valverde sounded a note of caution by conceding Champions League semi-final opponents Liverpool are a “fearsome rival” but Rakitic suggested having Messi on their side trumped that considerably.

The Argentina international has been judiciously rested over the last couple of weeks as, with a healthy lead they were able to coast to an eighth title in 11 years at the weekend, Valverde has had one eye on European competition.

Messi has still been required to come up with decisive moments – he came off the bench to score the winner which won the title against Levante – and that gives his team-mates a huge boost.

“Whenever our captain says something the rest of us are there to follow in his footsteps,” said the Croatia midfielder.

“Leo has been a league champion in 10 of the last 15 years and seeing how he lifts the title with extreme happiness, that engages everyone.

“If he is happy to win every title and win every game what can you say about the rest of us? We are even more eager if possible.

🔊 @ivanrakitic: "We are confident and eager, the team is very switched on and now comes the most beautiful game." #BarçaLFCpic.twitter.com/QisiHPgvia— FC Barcelona (@FCBarcelona) April 30, 2019

“Being able to follow the best player in history gives us a lot of confidence.

“How many Champions Leagues does Leo have? He already has won four and I don’t think he’s going to get too nervous about tomorrow.

“What needs to be understood is that Leo is ahead of us and we follow him.”

Valverde struck a more conservative tone in stressing what would bring success against Jurgen Klopp’s side was team-work and sticking to their game-plan.

Liverpool have never lost in four visits and are the only English team to win there, twice.

They have kept four clean sheets in their last five matches in league and cup and in their last 10 games they have scored 29 times.

“Our intention is to win the game,” he said.

“Leo is feeling fine. We know throughout this month we have been able to rest him more than others.

“We have played three games a week, we’ve played against (Manchester) United and now we have to play against Liverpool so the workload is quite high.

“We wanted to win the title, we have managed that, so we are ready for this.

“We know how valuable it is if they don’t score but as we know in this kind of tie you don’t need to play one good game you need to play two good games, you can’t be absent in the game for five minutes because if you do that against Liverpool they will lock you into your half of the pitch.

“They are a powerful team with extraordinary forwards and level of pressure, rhythm and pace which is very high.

“It’s an extremely difficult rival to play, they’ve lost only one game in the Premier League and that says a lot about them. I think it is a fearsome rival.”

What has made Liverpool so formidable this season is their defensive record, with 18 clean sheets and just 20 goals conceded in 36 league matches.

No small part of that is down to centre-back Virgil Van Dijk.

“We are talking about one of the best central defenders in the world,” added Rakitic.

“He has had a fantastic season, he has won the prize for the best Premier League player of the season.

“There is a lot of respect for him and the rest of his team-mates. But it doesn’t matter what their names are, we know Liverpool’s defence is very strong and they don’t leave many spaces.

“We want to cause them more trouble tomorrow than they’ve had in previous games this season.”